The days and weeks leading up to the Devon Derby are usually fraught with tension and hype, but there seems to be an extra layer of tension for Saturday’s edition with both sides still in the thick of the playoff hunt, although the Cornish know that by

recording a win they could effectively end City’s hopes of City’s season continuing through May. City’s treatment table is finally looking a little less busy with David Noble and Scot Bennett making the bench in the agonising defeat at Portsmouth, and both will hope to make the starting line-up as Paul Tisdale searches for the winning formula after just one victory so far in 2015. One name definitely missing will be Jamie Reid, the Northern Ireland U21 international has come back from Weymouth but is back out on loan a Torquay.

At the end of January, as Plymouth Argyle failed to win for the seventh game in succession by losing at whipping boys Hartlepool, the vultures appeared to be

circling round John Sheridan. However, February has been rather more kind with three successive victories, including a 2-0 win at promotion chasing Wycombe, a run that has put the Pilgrims back into the playoff zone. Lewis Alessandra has scored in all three games to take his tally to 11 in all competitions, still behind 14 goal top scorer Reuben Reid. Birmingham’s Oliver Lee plays the last game of a productive loan spell, while Ryan Brunt, loaned from Conference side Bristol Rovers, has made an encouraging start with two goals to his name so far.

It was a shame that the fixture computer threw up the reverse fixture so early in the season, as a City side still plagued by injury and illness was no match for a strong

Plymouth side, going down 3-0 with goals from Harvey, Reid and Nelson. The SJP version of the Devon Derby last season was an altogether more edifying experience for City, Arron Davies putting the hosts ahead before Luke Young equalised, only for City to win through goals from Alan Gow and Scot Bennett – although that would prove to be City’s last home win for several months. Overall it’s that lot down the A38 who have the Football League head to head lead with 26 wins to City’s 17 (20 draws). 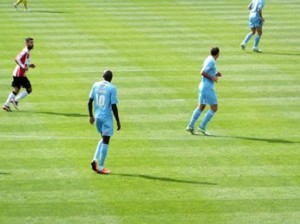