With the Devon Derby rapidly approaching the Devon and Cornwall Constabulary have outlined their plans for policing the game between Exeter City and Plymouth Argyle at St James Park., which kicks off at 1pm in Saturday (21st February).

The match is all-ticket and the police advise Argyle fans not to travel without a ticket.

With a large crowd expected at St James Park, of over 7,000 there will be extra police in attendance to help the event to go smoothly.

Whilst our officers will be visible as part of our policing of the match, this is not cause for alarm. We are operating a low-key approach to policing this game and as ever we are looking at engaging with all the public, whether they are football fans or shoppers, in a friendly manner.

There will be additional officers out and about in the City during the build up,  during and after the match. They will also have support

from the dog and mounted police units.

It is an all-ticket match and we remind Plymouth fans that if you do not have a ticket you will be turned away at the ground.

Exeter City has informed us that ticket sales have been strong and a big crowd is expected. Please allow extra time for your journey as

there will be congestion in and around Exeter and on public transport throughout Saturday.

The horses will be supplied by Avon and Somerset constabulary.

As such there will be no designated pub for Argyle fans. It’ll be at the discretion of landlords whether to admit football fans. 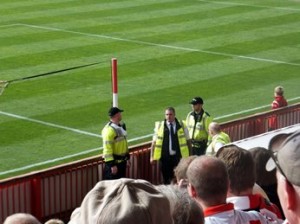