City finally tasted defeat in front of their own fans for the first time since Cheltenham snatched a 1-0 win at the Park in March, but having now lost three of their last five in all competitions Matt Taylor will be anxious to get back on track with a number of key fixtures coming up over the next month or so. One thing Taylor needs to address urgently is City’s underwhelming first half displays which have seen the Grecians go into the break behind on several occasions of late and, while second half performances have often come to the rescue, this turned out not to be enough in recent matches against Northampton and Colchester. City supporters’ woes were added to earlier in the week with the news that Sam Nombe’s hamstring injury was worse than first thought, and the striker who has made such 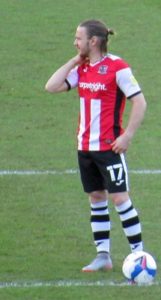 an impression since joining from MK Dons in the summer will be out for months rather than weeks, joining the likes of Nigel Atangana and Tim Dieng on the injured list. Padraig Amond got the gig on Tuesday night and celebrated with his 200th career goal, but it was evident that City’s style would need to change to adapt to his different capabilities – and as a result Saturday could see a return to a back four to give Amond some company up front and play to his strengths. Ironically this would likely lead to Jake Caprice and George Ray missing out on appearing against their former club.

Having surprisingly disposed of Keith Hill ahead of their unsuccessful playoff push, Tranmere went back to an old head with the appointment of Micky Mellon for his second spell in charge. Things have got off to a fairly slow start as Rovers have looked for consistency, although successive league wins (albeit sandwiching a 4-0 thrashing by Leyton Orient in the FA Cup) have seen Mellon’s side move into the top 10 and just four points behind City. Goals have been a problem, with Liverpool loanee Paul Glatzel leading the way with four in all competitions and two players – Peter Clarke and Kieron Morris – registering three apiece in the league. Mellon has, though, a lot of talent at his disposal, such as Jay Spearing, Callum McManaman and Nicky Maynard, so expect Rovers to remain in and around the promotion picture come May.

City will be looking for a repeat of the fixture that took place this same weekend last season, when they obliterated Tranmere 5-0 – Ryan Bowman notched a hat-trick for the second successive home match, with a penalty from Matt Jay and a strike from Jake Taylor sealing the rout. Tranmere got a modicum of revenge at Prenton Park, a brace of penalties from David Nugent and Danny Lloyd either side of Joel Randall’s strike. That win extended Tranmere’s league head to head lead to 20-13, just five matches finishing level. Head to head information for the last 12 games can be found at https://www.grecians.co.uk/wordpress/?p=9854