City’s FA Cup adventure is over courtesy of the referee’s bizarre interpretation of the offside law, meaning Matt Taylor can return his focus to the promotion effort, starting with what is already shaping up to be something of a six pointer on Tuesday night. While City have been reasonably fortunate this season when it comes to injuries, Sam Nombe limped off at Cambridge to join Tim Dieng and Nigel Atangana on the injured list. Nombe’s hamstring strain may mean a shift in formation with either Padraig Amond or 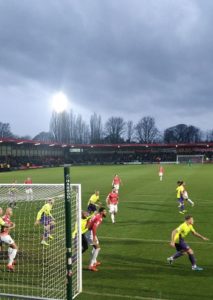 Jevani Brown likely to lead the line, while other changes may be necessary to keep things fresh.

Having returned to the basement after one season following promotion, Northampton are determined to bounce straight back again, with Jon Brady’s side currently occupying second place in the table and, having enjoyed a weekend off due to also having lost to Cambridge in the FA Cup, the Cobblers will be fresh ahead of their long trip to Devon and looking to continue a three match unbeaten run. Sam Hoskins has been at the club a while and remains their most potent goal threat, heading their scoring charts in the league with six, but they have quality all over the park. One player unlikely to move from the bench is Jonny Maxted, the former City keeper having moved to Northampton in the summer following his release by City.

Northampton have a decent record in recent games against City, winning the last three in all competitions including that 4-0 demolition in the playoff final in 2020, while they won the last time they visited the Park in last season’s EFL Trophy on the same Tuesday night last year. Their last league visit, however, finished 3-2 to City. This has been a common fixture historically, with Northampton enjoying a huge lead in league head to heads with 49 wins to City’s 29, 30 matches finishing level. The last 24 games between the two sides are listed at https://www.grecians.co.uk/wordpress/?p=9878