A patched up City side featuring two league debutants put up a brave fight before falling to a last minute penalty at fellow promotion chasers Sutton, and Matt Taylor will be under no illusions about the task facing his squad on Tuesday night as they make the relatively short trip to the division’s runaway leaders. In addition to the players known to be missing through injury, the squad at Sutton was denuded of the likes of George Ray, Colin Daniel, Josh Coley and Callum Rowe, while others like Ben Seymour and Jonathan Grounds were included on the bench despite not having trained following the Covid outbreak at the club. Taylor will be assessing the fitness of Cheick Diabate, who limped off 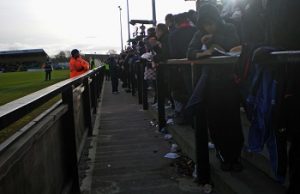 with cramp on his very encouraging EFL debut, while Sam Stubbs managed to get through 90 minutes but that may rule him out of Tuesday night. Jack Sparkes is expected to return from his loan at Torquay and may be thrown straight in.

Having dispensed of the services of long serving manager Mark Cooper at the tail end of last season, Forest Green made what is proving to be an inspired choice in appointing Rob Edwards (not the City legend) in the summer, as the club on the hill appear to be finally providing a return on Dale Vince’s significant investment and are currently cruising towards promotion to the third tier. Undefeated in the league since early October, their only reverse since then was a shock 3-2 defeat at St Albans in the FA Cup, while they too had an enforced break of three weeks before defeating Paul Tisdale’s Stevenage 2-0 on New Year’s day. Their previous fixture produced the ridiculous scoreline of 5-5 at Oldham. Edwards’ side is lethal in front of goal, with Matt Stevens (17 in all competitions) and Jamille Matt (15) leading the way, while former City loanee Kane Wilson has continued the sparkling form he showed in the red and white and is a transfer target for clubs higher up the pyramid. Also expecting to feature is former City captain Jordan Moore-Taylor. Unlike City, Forest Green appear to have been able to select consistently, with four players featuring in all 21 league matches so far and another three missing just one match – perhaps providing a clue as to their stunning success in the first half of the season.

With both sides enjoying a free scoring reputation, naturally the meeting at the Park in September finished 0-0. That was the same scoreline late last season at the New Lawn, while City can take solace from the fact that Forest Green haven’t won this fixture since October 2018. As a result City lead in league head to heads with eight wins to Forest Green’s two, although this is one match to put your X in the pools coupon generally, as nine matches have finished level.

The match officials for the this game are:-