Sandwiched in amongst a number of cup fixtures thanks to Cambridge’s injury time equaliser in the FA Cup last week comes an intriguing clash near the top of the table against a side defying the odds. City were in action last night (Wednesday) albeit with only a handful of regular first team players in the 3-1 win over West Ham U21s in the EFL Trophy, and Matt Taylor will return to as near a full strength side as he can muster given City’s current problems with injury and suspension – Jake Taylor sits this one out as part of his three match ban. Nicky Law also missed the trip to Cambridge and time will tell how quickly he will return. Nigel Atangana and Matt Jay will look to deputise again while Alex Fisher netted his first City goal at Cambridge so will hope to retain his place alongside Ryan Bowman. 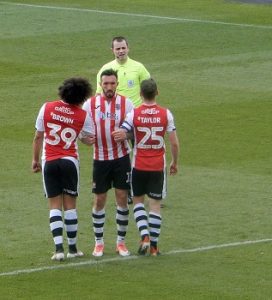 Most pundits wrote Cheltenham off in the summer – one of the smaller clubs in the division it looked likely to be a season of struggle, but Michael Duff (like Mike Flynn at Newport) has shaped a side that is battling at the right end of the table. The Robins are without a win in their last three matches in three different competitions after a stunning run of seven wins and two draws in their previous nine fixtures in all competitions so will hope to get back on track on Saturday. The latest defeat was one that made headlines even for the Oxygen-starved EFL Trophy – a 7-4 defeat at home to Newport on Tuesday night. That match saw the long-awaited debut off the bench for former City striker Reuben Reid, the summer signing from Forest Green having been injured prior to the start of the season. Reid will be desperate to feature at some point as he particularly relishes playing against his former clubs. However, with six goal joint top scorer Luke Varney likely to start Reid will probably have to make do with a place on the bench. Ryan Broom, also with six goals to his name, is another to watch.

The sides have already met this season – Nicky Ajose scoring the only goal in a 1-0 win for City in the EFL Trophy. The corresponding fixture in the league last season saw City recover from being 1-0 down at half time (Broom), second half goals from Sweeney, Forte and Stockley seeing City home 3-1. The reverse at Whaddon Road was a Brett Huxtable special appearance – City were 1-0 up through Moxey) before Huxtable overruled his linesman stood closer to the action to give a penalty which was converted by Conor Thomas before sending Christy Pym off late on. That draw ended a run of seven straight victories for City and ensured Cheltenham still have a slight lead in league fixtures with nine wins to City’s seven, two matches finishing level. The head to head in all competitions can be found at https://www.grecians.co.uk/wordpress/?p=9292

Alan Young has reffed two Exeter games, the most recent being the home Port Vale game in September https://www.grecians.co.uk/wordpress/?s=alan+young