It was back down to earth with a bump for City last week as familiar frailties – a failure to turn possession into goals while giving soft goals at the other end – resulted in defeat at Bradford. The misery was compounded by two red cards – one of which City successfully appealed. City will therefore be forced into at least one change for a second visit to Cambridge in less than a month for the FA Cup, with skipper Jake Taylor set to miss three matches for his reckless lunge. Much will 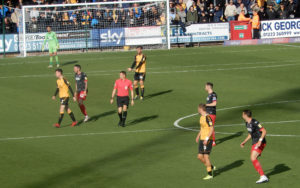 depend on the formation Matt Taylor wishes to employ, but it’s thought the likely deputy will either be Nigel Atangana or Matt Jay. Jack Sparkes missed the last two matches with Craig Woodman restored to the side, but Taylor may opt to return to youth on Saturday, while Alex Fisher could push Ryan Bowman for a starting berth with Bowman looking somewhat out of sorts in front of goal.

Cambridge have had very much a stop-start season so far, the 4-0 thumping of City last month sticking out like a sore thumb as arguably their best home performance of the season. The Us have registered one win since then over struggling Crawley, while Colin Calderwood’s side was in action in midweek, going down on penalties to Arsenal U21s after a 1-1 draw in the EFL Trophy. As usual that side was barely recognisable from the Crawley victory last weekend so there shouldn’t be the issue of tired legs. Sam Smith, top scorer with six, remains the main man to watch alongside players like George Maris and veteran Marc Richards.

The sides have met before in the FA Cup – the last occasion was in 1990/91 when Cambridge United emerged victorious 2-1 at the Park.

Peter Wright has been in charge of three Exeter games, the most recent being the home draw wit Leyton Orient https://www.grecians.co.uk/wordpress/?s=peter+wright