Saturday’s 0-0 draw with Cheltenham probably won’t live long in the memory, but fortunately City seem to have got through the match without adding to the already congested treatment room. Matt Taylor could have done without Cambridge’s late equaliser last Saturday, however, as he now finds himself with an extra fixture for his threadbare squad. Any changes on Tuesday night may only be to give tired legs a rest – perhaps Jordan Tillson in for Nigel Atangana, who is 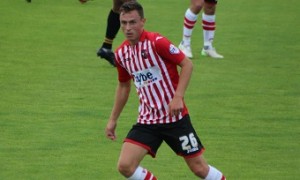 still working his way to fitness, and Lee Martin may return to the starting line-up. Jake Taylor sits out the final match of his suspension.

While City are enjoying a third successive home match in a week, it’s the opposite for Cambridge who, since the 1-1 draw last Saturday have suffered 2-1 defeats on the road at Peterborough in the EFL Trophy and at Walsall on Saturday. Their goal scorer on both occasions was Harvey Knibbs, so he goes into the replay in decent form although it’s Sam Smith, leading scorer with seven including that injury time leveller last week, who City will have to look out for. The evergreen Marc Richards has a fine record, while George Maris pulls the strings in midfield.

Matches between the sides during the course of a season usually tend to favour one over the other, so City will hope to arrest this on Tuesday night having gone down 4-0 in the away league fixture a couple of weeks before the FA Cup tie. Furthermore City have yet to register an FA Cup win against the Us, losing twice and drawing twice, most recently before this season a 1-2 home reverse in the 1990/91 season which saw Cambridge eventually reach the Quarter Final.

Sam Purkiss has taken charge of just the one Exeter game, which was the opening game of the season, the 1-0 win over Macclesfield.