Perhaps the most anticipated Devon Derby for several years sees the “Sold Out” signs erected around the Park, although City’s recent slump in form suggests things might not have been the same had tickets gone on sale more recently. Successive long away trips in the past week saw City ship seven goals, scoring once in reply, an alarming turn of events

with City previously having been so solid in defence to alleviate the concerns at the other end of the pitch. Matt Taylor has work to do to turn things back around, and what better way to get back into form than with a win in the biggest match on the calendar? Taylor rang the changes at Scunthorpe on Tuesday night with five new faces, but expect few of them to start on Saturday as Taylor is likely to revert to a more tried and tested formula with the likes of Sweeney, Law, Williams and Lee Martin set to return.

While City made a storming start and are going through a poor patch, the opposite could arguably be said of Plymouth aka Bury Old Boys FC – the Pilgrims having taken advantage of Bury’s malaise to poach their manager (Ryan Lowe) and a number of their players during the summer. Results were patchy to start but they come into the Devon Derby on the back of a five match unbeaten league run including a 4-0 thrashing of Leyton Orient on Tuesday night. A win on Saturday would see Plymouth overtake City in the table, a scenario that seemed unlikely a few weeks back. One key player in the recent upturn has been former City forward Joel Grant, the Jamaican international has scored in each of his last four matches. Another player to watch is Danny Mayor, who was majestic in Bury’s promotion campaign last season.

It was the green half of Devon celebrating the last season the sides were in the same division – the corresponding fixture in September 2016 saw high-flying Plymouth come away with a comfortable 2-0 win against struggling City thanks to first half goals from Carey and Garita. Although City were flying by the time they visited Home Park in February, they came unstuck with a 3-0 defeat, the goals from Kennedy, former City loanee Ryan Taylor and a late Jervis penalty. That extended their league head to head lead to 29-19 (20 draws). Details of the last 36 games between the two Devon clubs 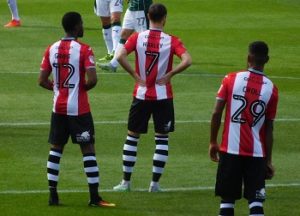 Darren Drysdale has refereed nine Exeter games, including one Devon Derby in 2013.  Details at https://www.grecians.co.uk/wordpress/?s=darren+drysdale