Have we all come back down to earth yet? The Devon Derby will live long in the minds of all City supporters as City, a side that all too often this season has played well but not taken their chances, finally found their mojo and dished out the sort of thrashing dreams are made of. Matt Taylor made a few bold choices, probably none more so than Craig 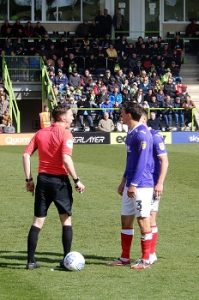 Woodman returning to the fold, and Woodman’s performance will have given Taylor a proper selection headache going into the long trip to Bradford, meaning Jack Sparkes is likely to miss out again should Taylor decide not to change a winning formula.

One of the more surprising aspects of last season in League One was the demise of Bradford. Having finished in the top half every season since returning to the third tier, including successive playoff tilts, the Bantams plummeted to the foot of the table last season, finishing adrift at the bottom fully nine points from safety. Gary Bowyer, who took Blackpool up at City’s expense in 2017, was brought in towards the end of last season but was unable to arrest the slide, but his side are in the mix this season as expected. His side also has the luxury of an extra period of rest as their fixture at Macclesfield last week was one of several to fall foul of the weather. Bowyer was busy in the summer, offloading several (including Billy Clarke, who featured from the bench against City last week) and six permanently and five on loan. Perhaps the strangest bit of transfer business in the summer was, however, the departure on loan of striker Eoin Doyle to fellow League Two side Swindon, which looks even stranger when you consider Doyle is the clear top scorer in the division currently. Given Bradford’s top league scorer, James Vaughan, has four to his name and you have to question Bradford’s wisdom in letting Doyle go. Other players of pedigree to look out for include Clayton Donaldson and experienced keeper Richard O’Donnell.

Although Bradford ended up gaining promotion while City’s season fell away dramatically in 2012/13, it was City who took the bragging rights in this fixture. The corresponding fixture finished 1-0, Jamie Cureton bagging the goal. 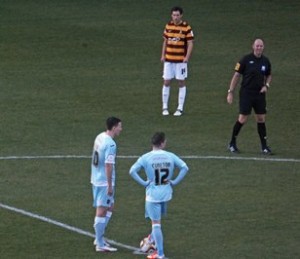 Cureton was left on the bench for the return at the Park in March, but this didn’t matter as an OG from keeper Duke plus goals from D’Ath, Bennett and O’Flynn (Reid scoring for Bradford to reduce it to 2-1) gave City an emphatic 4-1 win which at the time seemed to boost City’s own promotion credentials while ending Bradford’s, before the sides’ fortunes swapped dramatically in the closing weeks of the season. That win, however, meant City have the slight edge in league head to heads with 15 wins to Bradford’s 14 (11 draws).

Michael Salisbury has taken charge of four Exeter games, they can be viewed at https://www.grecians.co.uk/wordpress/?s=michael+salisbury