City got back to winning ways in their second successive 2nd vs top encounter last week with a 1-0 win over then leaders Forest Green, although Crewe leapfrogged City on goals scored with their 4-2 win over Carlisle, so Matt Taylor’s side are still 2nd in the table as they embark on the first of two lengthy away trips in the space of four days with a visit to

Cambridge. Those worried about City’s prospects with Lewis Ward sidelined needn’t have worried as replacement Jonny Maxted turned in a MOM performance including one particularly eye-catching save. Another change saw Aaron Martin come in for Dean Moxey, and his performance too will have given Taylor a selection headache for the right reasons. Elsewhere Nigel Atangana’s introduction to the side continued from the bench and he may have to be patient.

Cambridge, under the experienced guidance of Colin Calderwood, were tipped to struggle despite their squad containing a number of very decent players for this level, and while they aren’t currently in any trouble the Us haven’t really pulled up many trees either, sitting in 16th place currently. Worryingly for Calderwood Cambridge are without a win in their last five matches since a stunning 4-0 thrashing of Mansfield, and have lost their last two matches 1-0. Perhaps symptomatic of their malaise is that summer signing Marc Richards, the vastly experienced and prolific 37 year old, has been without a goal since late August, while another player who has always caught the eye, George Maris, has been in and out of the side. Sam Smith is top scorer with five.

Once City’s bogey side, Cambridge now probably feel that way about City – since Cambridge returned to the Football League in 2014 City have won eight, drawn one and lost one of the fixtures between the sides. Last season saw City do the double for the second successive season – the corresponding fixture at the Abbey Ground in August saw City race into a 2-0 lead early on through soft goals from Forte and Stockley (the latter in particular a nightmare for goalkeeper Mitov), while it was closer still in January, City winning 1-0 through a trademark late Nicky Law goal. The recent run of wins in 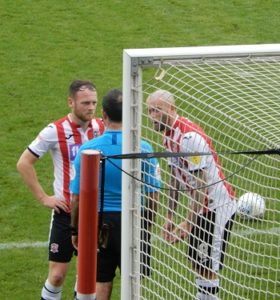 City’s favour has closed the league head to head gap, with Cambridge ahead 23-20, 11 matches finishing level. The last 45 encounters can be found at https://www.grecians.co.uk/wordpress/?p=9355

This is Leigh Doughty’s first time in charge of Exeter, and he is in his first season as an EFL referee. Leigh is from Freckleton in Lancashire and is a PE teacher.