For the second successive Saturday a match involving City sees the 2nd place club host the leaders, Forest Green having taken advantage of the top two drawing at Crewe last weekend to take top spot, their 3-1 win over Crawley extending their unbeaten league run to six matches since losing to Newport at the end of August. Jonny Maxted will make his league debut 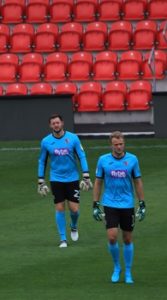 with Lewis Ward unable to face a side he spent time on loan at last season due to the broken arm he picked up late in the match at Crewe. Matt Taylor has been frustrated by his side’s inabililty to score enough goals – last week being a case in point as City should have been out of sight after an hour before Crewe rallied – and Alex Fisher was given the starting nod in the EFL Trophy win at Newport on Tuesday night. Also in the frame will be Matt Jay, whose double secured that win.

Forest Green, thanks to the large wallet of their flamboyant owner Dale Vince, were installed amongst the favourites to go up this season after their campaign fell just short in the playoffs last time out, and after a relatively slow start those predictions are starting to look right as Mark Cooper’s side have eased their way into top spot, scoring seven goals in their last two league matches. The on-off saga of Christian Doidge was finally resolved in the summer with the striker departing for Hibernian, alongside the move of former City striker Reuben Reid to Cheltenham, which seems to have left Forest Green somewhat denuded up front (despite that recent return), relying instead on defender Joseph Mills (five) to supply the goals. Summer signing Matt Stevens got off the mark with a double in the 4-0 win at Salford two matches ago. One name very unlikely to feature is Lloyd James – the former City midfielder appears to have done something to upset Cooper as he hasn’t featured at all even in pre-season.

The corresponding fixture last season was a landmark one for Forest Green as they registered their first ever win at the Park – going into a 2-0 lead through Brown and Shepherd before Aaron Martin emulated the likes of Beckham and Rooney in scoring from his own half deep into injury time, although it owed more to a calamitous error from keeper Sanchez, allowing a trickling ball to run under his foot into the net. City needed to take all three points on the final day at the New Lawn to have a chance of making the playoffs, but were thwarted (including hitting the woodwork) in a 0-0 draw. City have the league head to head lead with six wins to Forest Green’s two, six matches have finished level. Details of matches between the two sides can be found at https://www.grecians.co.uk/wordpress/?p=9840

This will be Paul Marsden’s first time in charge of an Exeter match.