City’s fortunes have slumped somewhat of late as Matt Taylor’s decimated squad has gone four games without a win including successive defeats, so the FA Cup is a chance to get things back on track. Archie Collins had a tough time on his league debut at Tranmere, and Jordan Tillson may come back into the starting line-up, but other than that unless the likes of Holmes or Ogbene are ready to return the squad has something of a threadbare look about it.

Blackpool, after an early managerial change, have been performing well on the pitch even if problems around the ownership continue off it. Terry McPhillips replaced Gary Bowyer firstly on a caretaker basis before being given the job, and he oversaw an 11-match unbeaten league run plus a run to the fourth round of the EFL Cup, including a win over QPR. Recent form has been more patchy before a 1-0 win at Gillingham on Tuesday night, and the Seasiders sit in 9th place in the League One table. Goals have been shared around but it’s former Aston Villa striker Nathan Delfouneso who leads the way with four goals.

The last meeting between the sides is one City fans would probably like to forget, as Blackpool emerged victorious in the 2017 playoff final at Wembley. Brad Potts put Blackpool ahead early on, David Wheeler equalised before half time, 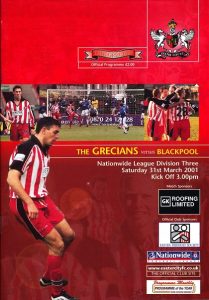 but Mark Cullen’s strike in the second half was enough to send Blackpool back to League One at the first attempt. City will be heartened, however, by the sides’ only previous cup meeting – a 3-0 win in the League Cup in the sensational 1989/90 title-winning season. Head to head back to 1989 can be found at http://www.grecians.co.uk/wordpress/?p=9863