With City’s dreams of an FA Cup run up in smoke after 23 minutes on Saturday, attention turns to a dead rubber on Tuesday night in a competition where City are already guaranteed to progress. Matt Taylor’s 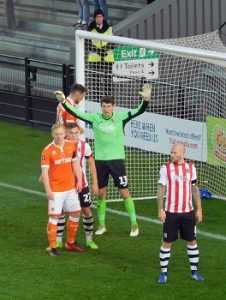 squad is of such threadbare proportions that he was only able to name six substitutes against Blackpool – he may have called up a youngster but they were being trounced in the FA Youth Cup at Stevenage. Due to the different suspension rules in the EFL Trophy Dean Moxey will be available on Tuesday night, and he may deputise for Craig Woodman to save the veteran’s legs for Northampton. With so few players to choose from Taylor will likely do just enough to meet the selection requirements of the competition before looking to his youngsters to fill the gaps.

Bristol Rovers are enduring a difficult start to the season in League One and currently sit in 20th place, although their last league match was a 3-0 win away to City’s FA Cup conquerors Blackpool. Like City they are already guaranteed passage to the knockout stages and, with a busy schedule including an FA Cup replay against Barnet to come, Darrell Clarke is likely also to fulfil the minimum requirements for selection before turning to his youngsters. Therefore there is no guarantee former City favourites Liam Sercombe and Tom Nichols will play, but youngster Cameron Hargreaves, who joined Rovers from City, may feature having played in this competition last season.

The sides met this summer in pre-season in a hastily arranged fixture at the Memorial Stadium, with City enjoying the run-out with a 4-0 win that perhaps pointed the way for the clubs’ respective seasons so far. It was Rovers who took the honours the last time the sides met competitively in their promotion season of 2015/16, bagging four points from the fixtures – a 1-1 draw at the Park (Sinclair for Rovers, Reid in injury time with the equaliser) before winning 3-1 at the Memorial Stadium – 2-0 up at half time through Bodin and Brown, Jake Taylor pulled one back only for Matty Taylor to seal the points.

Kevin Johnson has refereed 11 Exeter games, going all the way back to 2002. Details at http://www.grecians.co.uk/wordpress/?s=kevin+johnson