The first match in front of supporters in the Adam Stansfield Stand proved to be a damp squib as City put in a tepid display in losing to Forest Green to not only end the club’s unbeaten run but to also make it now three games without a win ahead of a tricky trip to a welcome returnee to the league. The big news from the Forest Green game was Christy

Pym missing out due to a training ground injury, and Pym was due to have his injury looked at during the week to assess how long he is out for. Should he not make it back in time James Hamon is set to deputise once more, with goalkeeping coach Chris Weale on the bench. Lee Holmes also missed out last week despite his goal from the bench at Crawley, so should hopefully be back in contention.

Given the size of the club it was perhaps a surprise Tranmere spent three seasons in non-league, and on returning via the playoffs last season they have been expected to compete near the top of the fourth tier – and so it is proving, with Tranmere going into Saturday’s game in 7th place knowing that a win would take them above City. It’s a City “reject” making the headlines in the North West, with James Norwood’s double last week taking him past Jayden Stockley to head the League Two goalscorer chart with 10 goals. Micky Mellon, who dropped two divisions to take over Tranmere, has plenty of experience at his disposal including former City youth player Mark Ellis and the behemoth Steve McNulty. 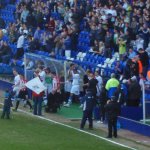 The last time the clubs met was in Tranmere’s relegation season. The match at Prenton Park came early on during Rob Edwards’ brief time in charge having left City, and Paul Tisdale was able to claim bragging rights over his former number two with a 2-1 win – Cummins and Moore-Taylor for City either side of Holmes’ strike for the hosts, as Edwards’ time at Tranmere drew towards a close. It was something of a shock, however, when struggling Tranmere reversed the scoreline at the Park – Myrie-Williams and Donnelly scoring either side of Alex Nicholls’ equaliser. Tranmere have the league head to head lead with 17 wins to City’s 12, five matches finishing level. Details of our encounters since the return to league football can be found at http://www.grecians.co.uk/wordpress/?p=9854

Just the one City match for Thomas Bramall http://www.grecians.co.uk/wordpress/?s=bramall