Despite City’s best efforts they couldn’t edge over the line against Crawley, the 2-2 scoreline made all the more frustrating by Wycombe’s capitulation against promoted Accrington, meaning City missed the chance to move into the automatic promotion places. Paul Tisdale must therefore rally his troops to win both of their final fixtures to keep the pressure up on the Chairboys. Jayden Stockley’s brace against Crawley took his season’s tally to 24, and he will look to keep up his 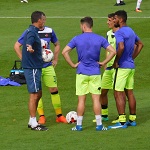 scintillating form, alongside him will either be Robbie Simpson or Matt Jay. Elsewhere Ryan Harley made a welcome return to the bench to slightly ease City’s injury woes.

It has been a season that never really got going for Stevenage, a lack of consistency meaning they never really troubled the scorers at either end of the table. Darren Sarll paid the price with his job, paving the way for club legend Dino Maamria, who played and then was number two to Graham Westley, to take it on. After a couple of wins Stevenage have reverted to type, drawing with Mansfield but losing to Cambridge and Coventry in their last two matches and are guaranteed a bottom half finish. Stevenage rely heavily on Dan Newton (16) and Matt Godden (14) for the goals, while Ronnie Henry at the back is always a strong presence.

It was just before Christmas when Stevenage made the trek down to Devon, leaving empty-handed following a 2-1 defeat. After a goalless first half, Lloyd James gave City the lead from a free kick before Pierce Sweeney doubled the lead. Matt 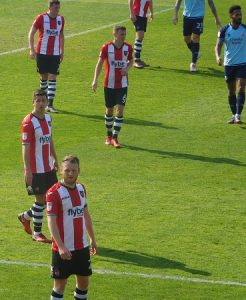 Godden’s 90th minute strike reduced the arrears to ensure a nervy finish. City were also victorious on their last visit to the Lamex Stadium. Despite losing skipper Jordan Moore-Taylor to a red card for a professional foul, City shrugged this off to win 2-0 through two goals in two minutes from Lee Holmes and Ollie Watkins. City hold the head to head lead in league fixtures with seven wins to Stevenage’s four, but if you’re a Pools player this might be one you put your “X” in the box, as eight fixtures have finished level.

Full head to head details between the two clubs can be found at http://www.grecians.co.uk/wordpress/?p=9507

Dean has taken charge of 14 Exeter games, details can be found at http://www.grecians.co.uk/wordpress/?s=whitestone