Exeter City have received a decision from the Professional Football Compensation Committee (PFCC) regarding Ethan Ampadu’s move to Chelsea and are disappointed by the verdict given.

The decision taken by the PFCC, following a meeting held in London on Wednesday, in summary means that Exeter’s total compensation is up to £2.5m: comprising a guaranteed sum of £1.3m based on a transfer fee plus international and first team appearances already made, with the balance made up of contingent sums amounting to of a further £1.25m depending on the player’s first team appearances with Chelsea, together with 20% of any excess.

The detail states that:

Chelsea Football Club should pay Exeter City an initial net fee of £850,000. In addition to the initial payment a fee of £450,000 is also payable. This fee incorporates an amount for the player signing a first professional contract, making five first team appearances and obtaining a se 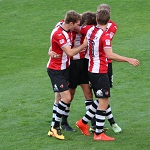 Chelsea will pay Exeter City 20 per cent of any excess over the amount already paid to Exeter City in respect of sums receivable by the way of a transfer/compensation or loan fees if the player should leave Chelsea,

whether permanently or temporarily by the way of a loan at any time in the future.

The Club has prepared meticulously for the PFCC hearing and was represented at the hearing by a barrister, Julian Tagg, Steve Perryman, Paul Tisdale and Keith Mason. In addition, further specialist professional input ahead of the hearing had been sought.

Whilst the Club recognise, that the compensation fee is not a transfer fee, but instead to reward the club for its investment in the training and development of a proven outstanding player, and that the tribunal has awarded Exeter significant contingent sums, to say that we are disappointed is an understatement. We are disappointed for our fans, our academy, which works so hard on producing talented young players like Ethan and for our management and coaching team who bring these players into the first team and beyond as part of supporting the work of the FA in its objective to produce international players of the highest quality which we believe we have done.

However, above all, we are disappointed for football as we feel this decision sends the wrong message in terms of financial reward for those owners, chairmen, managers and coaches up and down the country who are also working as hard as us to improve their clubs by producing talented home grown players for both club and country.“At this stage we have no written justification for the decision taken by the Professional Football Compensation Committee. We have been told that this will come within the next couple of weeks and once we receive this we will be communicating that to our supporters.