City’s fate was sealed somewhat at Stevenage, where the 3-1 defeat coupled with a win for Wycombe ensured the season will be extended by a couple of weeks. Saturday’s fixture therefore is something of a dead rubber, with only final league placing and playoff opponents to be decided, and Paul Tisdale has indicated this could be a chance to shuffle his pack somewhat to rest up some weary legs ahead of the playoffs. Dean Moxey again limped off at half time at 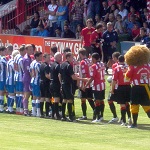 Stevenage and even if fit would be unlikely to be risked, while Tisdale indicated that most of his injured troops are close to a return – this could mean the return of Craig Woodman to the squad, while fringe players like Ryan Brunt could earn a run knowing that a strong performance could put them in contention to play a part as City look to win promotion.

It has been a frustrating season for Colchester. Tipped by many to do well, the Us have barely featured in the mix and go into the final fixture of the season clinging on to a place in the top half of the table. A run of three straight wins around Easter (including a Good Friday defeat of promoted Luton) gave John McGreal’s side faint hope for a late charge, but this was extinguished with three defeats and a draw in their last four matches. The lack of a consistent goal scorer may be a clue to why they haven’t challenged – they have had 17 different scorers in the league and top scorer Sammy Szmodics (13 in all competitions) hasn’t found the net since January. Mikael Mandron (10) is the other player in double figures.

It was a different story for Szmodics in December as Colchester extended City’s barren away run with a 3-1 win. A Lloyd James OG put Colchester ahead before Szmodics’ double saw them 3-0 up by half time. Jayden Stockley reduced the arrears in the second half but it wasn’t enough. The corresponding fixture last season however saw City complete a league double with a 3-0 win, the goals from Reid, Wheeler and McAlinden, all set up by Ollie Watkins. City have a slight league head-to-head edge with 27 wins to Colchester’s 25, 19 matches finishing level.

The last 20 encounters between the two clubs can be found at http://www.grecians.co.uk/wordpress/?p=9529

Breakspear has taken charge of 10 Exeter games, the most recent being on Easter Monday when City beat Cheltenham 2-1. The full list of his City games can be found at http://www.grecians.co.uk/wordpress/?s=breakspear

Previous: Next Up: Stevenage vs Exeter City
Next: Next Up: Lincoln vs Exeter – Play Off Semi-final 1st leg