City’s patched up side managed to contain runaway leaders Luton to a single goal, but that defeat which ended City’s recent run of wins will have dented the confidence somewhat heading into a busy run of games starting with a needle match against fellow promotion chasers. The injury problems at the back saw youngster Jordan Storey make his first league start, and his performance encouraged Paul Tisdale, although he will be hoping his regular pairing of Jordan Moore-Taylor and Troy Brown are ready for a return, likewise Pierce Sweeney and Troy Archibald-Henville. Ryan Harley, withdrawn at half time in the recent win over Forest Green, will also be monitored closely. 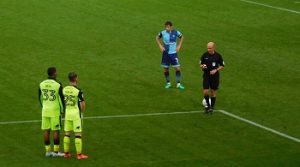 It has been something of a slow burner of a season for Wycombe, but five straight wins to kick off 2018, including a stunning win at Luton, have propelled Gareth Ainsworth’s side into the automatic promotion places. That run looked to be coming to an end last Saturday against Carlisle as they trailed 3-2 deep into injury time, but goals in the 93rd and 96th minute sealed a 4-3 win. While the usual stories have circulated about their tactics (for example, nine minutes of injury time at Luton) and their games still seem to finish after 5pm, it is worth noting that the Chairboys are second only to Luton in terms of goals scored. The goals have been shared around, but once again the focal point is “The Beast”, Akinfenwa having scored 14 so far in all competitions. Missing the match will be one-time City target Luke O’Nien, who picked up a red card in that win over Carlisle.

The reverse fixture won’t have lived long in the memory as the sides played out a 0-0 draw. In contrast, last season’s January transfer deadline day saw City triumph 4-2. With Ollie Watkins on the bench due to transfer speculation around him, City took the lead through Wheeler. Thompson’s equaliser saw the sides level at half time, before goals from Brown 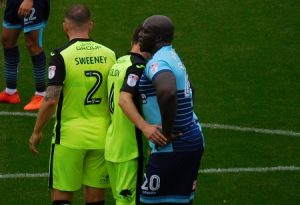 and Grant looked to have sealed the points. Jakubiak threatened a comeback in the 89th minute before sub Watkins clinched the win in injury time. Wycombe have a slight edge in league head to heads with seven wins to City’s five (five draws).

He’s taken charge of seven Exeter games, the most recent being Yeovil away in 2016 in which City won 2-0. Detauls of his City games can be found at http://www.grecians.co.uk/wordpress/?s=stephen+martin