A point against a promotion rival on Saturday was valuable (and amazingly the first home draw of the season) ahead of a midweek trip to a side still looking over its shoulder at the other end of the table. Skipper Jordan Moore-Taylor returned to the side against Wycombe, but youngster Jordan Storey had to be withdrawn just before half time – albeit with an

injury that may not prevent him taking the field on Tuesday night. Paul Tisdale shuffled his pack elsewhere too, and Tuesday may see a return to the starting XI for the likes of Ryan Harley and Hirem Boateng.

After a wretched start to the season, Port Vale brought in Neil Aspin as manager, a move that saw a real upturn in fortunes as the Valiants pulled away from relegation trouble, including a stunning 4-0 thrashing of runaway leaders Luton in the final game of 2017. However, rather than pushing on from that win Aspin’s side has failed to register a victory so far in 2018, with three draws and four defeats so far, and a 5-1 thrashing by Cheltenham on Saturday will have dented confidence somewhat. The key to stopping Vale is clearly to stop Tom Pope. While Pope has continued where he left off from his previous spell at the club and has 14 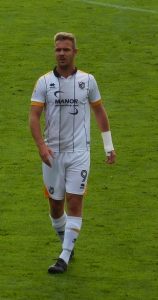 league goals (16 in all), nobody else has scored more than three in the league.

It was that man Pope who proved the difference when the sides met at the Park in October, as he scored the only goal of the match in what has so far proved to be City’s last home defeat. City’s last visit to Vale Park was in the 2012/13 season, as City stunned a Vale side that would eventually be promoted with a 2-0 win through goals from Cureton and Coles before Mark Molesley saw red late in the game. Port Vale have the edge in league head to heads with 20 wins to City’s 15, while 10 matches have finished level.

He’s refereed 13 Exeter games, the most recent being the 2-0 win over Grimsby at the Park back in November. Full details of those 13 games can be found at http://www.grecians.co.uk/wordpress/?s=whitestone