The Exeter City Trust Board met on Tuesday night at a scheduled meeting. The fallout from the Club taking a loan from the PFA continues, and the Trust Board re-exerts its influence over the running of the Club and the Club Board.

One item that was discussed was the Trustee on the Club Board who acts as the Club Secretary, Roger Conway. Conway has issued his own statement on his own website, and this conflicts widely in many places with the 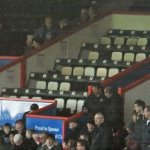 Trust Board statement, but it also provides additional information that the Trust Board does not yet want released to the wider audience. Conway’s statement can be viewed at http://www.rogerconway.co.uk/

The Trust Board statement says

For the breach of rule 82 Roger’s fellow trustees decided a suspension of three months from all Trust Board involvement was appropriate.

be able to continue to work with him. Therefore, for this breach and this reason, the decision made was to expel him from the Trust Board.

The Trust Board do acknowledge the dedicated hard work that Roger has undertaken for both the Club and the Trust over many years, but is further disappointed that in his subsequent statement on his website he has continued to breach the Board’s confidentiality.

In our article of last week, we said that ground development should be halted and Chorlton removed as Club Chair, we hope that will still happen. We also asked for more detail on the need for a PFA Loan, and the additional information now available strongly confirms that Trust members need further information and assurances.