Day 28 of the World Cup in Brazil. An unexpected result in the Germany v Brazil match, with the host out of the final.. Words used for Brazil performance such as humiliating and embarrassing, while the Germany performance was quite simply extraordinary and sublime.

Fixtures
9 July – Netherlands v Argentina, kick of at 9pm BST , live on ITV and to be played at the Arena de Sao Paulo, Sao Paulo

In the last four years I have heard over and again the same old certainty that Brazil had the best football in the world and that our five World Cups were the supreme evidence we didn’t need to worry. All that has been shot down in Belo Horizonte. We need to return to basics, take a deep breath and reflect on what happened on and off the pitch.

Brazil coach Luiz Felipe Scolari said his side’s 7-1 thrashing by Germany in their World Cup semi-final on Tuesday had been the worst day of his life.

I think it was the worst day of my life, but life goes on. I will be remembered as the coach that lost 7-1 but I knew that risk when I took the job and life goes on so that is what I am going to do.

We ask for forgiveness. To the people, please excuse us for this negative mistake.

I’m responsible for what the team does out on the pitch – and I am to blame for this result. I’m sorry we could not reach our goal. The fans supported us even when it was five, six, or seven down to Germany.

It’s not normal to concede four goals in six minutes but it can happen. Even Germany couldn’t believe what was happening.

Scolari  then commented on looking forward and said Brazil needed to recover some pride:-

The atmosphere in the changing room was terrible. Obviously. But what can you do? We’ll have to change things, our environment, when we go back to our base ahead of Saturday’s match.

No one expected that result and now we must work on the mind-set. We have to improve our motivation for the match on Saturday. We have to do our jobs, knowing that history goes on.

Most of these players will continue to play in their high-level teams and will be capped again. Life goes on. It doesn’t end with this defeat.

It was important to meet this passion and these emotions with calm, courage and with our own strength,. They were shocked by our goals and it made the game easier for us.

Everyone did their jobs incredibly well and with total concentration. We played well going forward and combined superbly.

A bit of humility would also be very good and we need to be careful that we stay concentrated on Sunday.

A loss is always a loss, but to lose like this hurts a lot more. That all that should happen in six minutes is very hard to take, especially when you have to keep on fighting to the end, knowing that it’s a virtually impossible task. I was thinking to myself: ‘If this is a bad dream, then I want it to end now’. 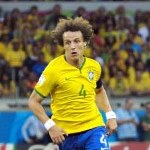 It’s hard to come up with an explanation. Nobody expected that to happen in such a short space of time, for us to concede four goals. Everything came off for them and everything went wrong for us. We’re still trying to come to terms with it, though sometimes there are things that happen in football that have no explanation.

Previous: Dan’s Deadline for Brazil
Next: Conway Expelled from Trust Board