side Cheltenham Town last season. He asked to go out on loan 3 weeks ago, but nothing came of that. So, today his contract was ended by mutual consent. Billy Jones is now free to joining another club, and being a free agent means he’s not tied to the transfer deadline.

Billy Jones left for Cheltenham last July, (see here), after wanting to improve his career prospects. He played in the 2 games against Exeter City last season, both wins (3-0 and 1-0).

David Noble. Has moved from promoted Rotherham United on loan to Cheltenham Town until January 2014. Noble

featured 25 times for the Millers last season, but created some tensions with the management team when he was convicted of an assault which took place while serving a FA Suspension with Exeter City. He’s started just the one game for Rotherham this season, which was in their 2-1 win over Sheffield Wednesday in the Capital One Cup. Noble moved from Exeter at the end of last season when not offered a new contract (read here).

We’re missing something at the minute. We feel that David has the ability to grab hold of the game with his ability on the ball and his passing. He demands the ball and he’s an obvious candidate. I’d like to thank Steve Evans for helping us get this deal done. 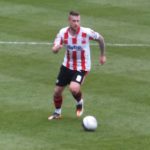 Previous: Next Up: Wycombe Wanderers at Home in the JPT
Next: Football League’s Player and Manager of the Month Nominations for League 2