The draw for the first round of the Johnstone’s Paint Trophy was made this morning on the Soccer AM programme. We had previewed the draw a few weeks back here.

Exeter City were drawn at home to play Aldershot. Who incidentally are opponents on Tuesday night up at the Recreation Ground. Aldershot will come to the Park full in the knowledge that they have not 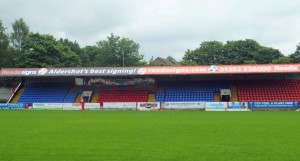 won a competitive game at St James Park since 1955.

The game is likely to be played on Tuesday 4th September, with an early kick off time. Remember these ties don’t have extra-time if the game is tied at the end of normal time. Also, the teams must use the bulk of the players that had played in recent league games.

Admission prices will be announced nearer the time. It would be expected that Exeter City will be able to agree with Aldershot Town a significant reduction in the normal prices.

Full details of the southern draw:-

Byes were given to:-

Previous: Round up of News for ECFC: Week ending 18th August
Next: Next Up: Aldershot Town