Following the disaster of the opening game against Morecambe, Exeter City travel to North-East Hampshire to The Recreation Ground in Aldershot. Aldershot, fresh from their 2-0 win over Plymouth Argyle, will be looking to consolidate their good start and justify manager’s Dean Holdsworth decision not to take up the Crawley

Aldershot enter the season in plenty of optimism. They had a good pre-season, though this did include a 2-0 defeat at home to the conquerors of the Grecians in the League Cup, Crystal Palace. Incidentally that match was reported on for Exeweb, and can be read here. They look compact, solid and well organised. Young Jordan Roberts has moved up from their academy and will give our full backs a run for their money with his pacey runs down either wing.

Since Aldershot reformed in 1992 after their bankruptcy, we’ve met 15 times in all competitions. Aldershot Town entering the Conference in 2003 on promotion and Exeter after relegation from the football league.

What is interesting is our record at the Rec. 8 games and all ended in defeats. This is the record:- 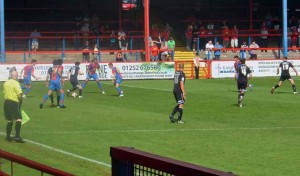 According to Soccerbase this is his second season as a referee, having been promoted from the Conference list this season.

Don’t forget to check out our excellent Exeweb ground guide to The Rec, here.

Previous: Grecians to Entertain Shots in JPT Tie
Next: Shots v Grecians: A view from The Rec