When City supporters were anxiously awaiting the fixture list and all the new teams on the horizon, they perhaps didn’t expect the first home match to be against exactly the same opposition as their last match in 21/22. The quirks of the fixture computer have, however, assigned Port Vale as City’s first visitors. New signing Jamal Blackman missed the 1-1 draw at Lincoln, with goalkeeping coach Scott Brown deputising, and Brown would be happy to step in against his former club should Blackman not recover in time to play. Elsewhere there 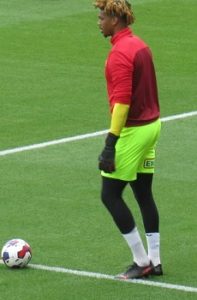 was a surprise with Josh Coley taking the place of captain Matt Jay, Taylor may switch this back on Saturday while others like Sam Stubbs will be hoping to shake off their knocks to play.

Having sealed their playoff place at the same time as they prevented City from lifting the League Two trophy, Port Vale then stormed to victory against Mansfield in the playoff final to seal their place in the third tier. Given the off-field issues related to manager Darrell Clarke, promotion was an extra special achievement for the Valiants. Clarke hasn’t been particularly busy in the transfer market during the summer (although more busy than City have been!), the main signing probably Gavin Massey from Wigan alongside mainly young products from higher level clubs. One of the departures in the summer was Aaron Martin, the former City defender will link up with his ex-City colleague Nigel Atangana on the south coast at Eastleigh. Port Vale got off to a winning start last week, defeating Fleetwood 2-1 with goals from Smith and Hall.

A capacity crowd greeted the two sides when they met in May, but a James Wilson goal in the first half consigned City to a 1-0 defeat and second place, with the celebrations in the away end as Port Vale sealed their playoff place. The reverse fixture at Vale Park in March finished 0-0. City’s recent record against the Valiants is poor, that 0-0 being the only point picked up in the last five fixtures dating back to a 2-0 win in September 2019. Recent results have therefore extended Port Vale’s league head to head lead with 24 wins to City’s 18, 12 matches finishing level.

and the pre-match interview with Matt Jay