Thanks to the World Cup taking place during the season, Football in July is with us, but City fans won’t mind given the new season coincides with the rarefied atmosphere of League One. The close season has been rather 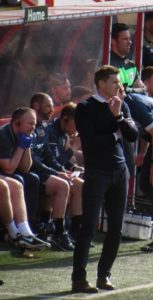 frustrating both for Matt Taylor and the supporters, with no new signings until this week, but the additions of Jamal Blackman and Pegs Chauke have started to assuage the fears – the signing of Blackman in particular plugging the huge gap left by the departure of loanee Cameron Dawson back to Sheffield Wednesday. Blackman will likely go straight into the starting eleven, while Chauke could find himself on the bench to start. City will be sweating on the fitness of a couple of players, particularly Jevani Brown, while a number of players impressed in pre-season and may be hoping that their form will lead to a starting berth on Saturday – for example Josh Coley.

After ten seasons in the basement, the 2022/23 campaign will see a number of new teams on City’s horizon – the first of which, however, is a familiar foe with City having last faced them in the 2018/19 season. Lincoln cruised to promotion that season and have spent the last three years establishing themselves in the third tier although, having made the playoffs in the 20/21 season the Imps dropped off to finish 17th last time. That led to a change at the top with Michael Appleton replaced by Mark Kennedy. Lincoln have been busier than City in the transfer market albeit not much busier, key signings including the dual swoop for Paudie O’Connor and Charles Vernam from Bradford, while the likes of Conor McGrandles and John Marquis have departed. Anthony Scully is a player who catches the eye, and will hope to impress against a club his father Tony played for briefly during City’s spell in non-league.

Having been vanquished by City in the 2017/18 playoffs, Lincoln made a huge leap forward the following season, winning the title by six points as City narrowly missed a return to the playoffs in Matt Taylor’s first season. The gulf in quality was evident early in the season when Lincoln made the trip to Devon and won 3-0 through Frecklington, Akinde and a Troy Brown own goal. It was a different story the following February as a late Akinde equaliser cancelled out Jay’s opener. Lincoln have the lead in league head to heads with 27 wins to City’s 19, 16 matches finishing level.