It’s hard to remember a season in recent years where City’s squad has changed to the extent it has done this summer. In addition to the release of a number of fringe players including both contracted goalkeepers and potential surprises like Tom Parkes, a number of players departed for pastures new either signed by new clubs or after turning down new contracts. Therefore it’s a City side denuded of the likes of Randell Williams, Ryan Bowman, Rory McArdle, Lewis Page, Jake Taylor and the latest million pound man, Joel Randall, that will take the field this season. Pierce Sweeney also left

for Swindon, but returned to City at the height of the turmoil surrounding the Robins. In their place have come a number of new signings – Cameron Dawson, Scott Brown (albeit mostly in a coaching capacity), Callum Rowe, Jonathan Grounds, George Ray, Timothee Dieng, Josh Coley, Jevani Brown and Sam Nombe. As is often the case when a squad has undergone such changes it may take some time to gel, but Matt Taylor knows that after an ultimately disappointing second half of last season the spotlight may be on him to start well. Were he to also lose Josh Key, like Randall subject to 7-figure transfer bids in recent weeks, the task would be even harder.

Taylor has not been helped by a pre-season disrupted both by Covid and injuries. Sam Stubbs is still not ready to make his debut despite signing in the January window due to his ongoing knee troubles, while Archie Collins, Alex Hartridge, Josh Coley and Matt Jay have also been spending time on the treatment table. The latter, now the club captain, is the most likely to take the field against Bradford, but these injuries will give City an even more unusual look as the fans return to the ground. Several of Taylor’s summer signings are likely to feature, with Brown and Nombe in particular whetting the appetite of the supporters in pre-season. 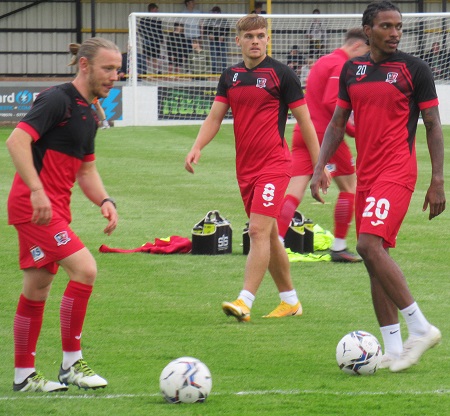 There will be an old foe in the dugout on Saturday, as Bradford pulled off something of a coup in poaching Derek Adams from newly promoted Morecambe in the summer. As a result the Bantams have immediately been installed amongst the promotion favourites, and signings like Alex Gilliead, Caolan Lavery, Abo Eisa, Oscar Threlkeld and Lee Angol will be expected to propel Adams’ new charges to a far better season than their mid-table finish last time. Yann Songo’o has once again followed Adams and will also be an important player.

With fans back in the stadium, they will no doubt hope that this fixture produces the same sort of excitement as it did last season, when the two matches produced nine goals in total. The corresponding fixture saw Bradford take the lead through Vernam, Sweeney equalised but the visitors led at half time through Crankshaw. However, Bowman and a Jay penalty sealed a comeback win for City. This followed a 2-2 draw at Valley Parade back in November where all the goals were scored in the first half – Bradford again took the lead through Clarke, Jay and Bowman put City in front before Bradford again scored right on half time through Staunton. City’s win in February ensured a league head to head lead, with 16 wins to Bradford’s 15, 12 matches finishing level. The last 11 games between the two sides can be found at https://www.grecians.co.uk/wordpress/?p=10699