City’s recent good run came to an end with a smash and grab 91st minute defeat against Cheltenham, and Matt Taylor’s side face a difficult trip as they look to get back on track. A rare midweek off will have given Taylor’s troops some time to recharge their batteries and work on things on the training ground, while it may also have enabled some players carrying knocks to get closer to a return – City supporters are waiting on news on the likes of Stubbs and Williams, but Taylor may be expected to return to the starting eleven that performed so well in beating Leyton Orient and Scunthorpe.

When Tranmere returned from Devon with their tails between their legs in December following a 5-0 thrashing, they’d have been greeted by supporters calling for Keith Hill’s head on their forum. Hill had only been in charge a short while following the dismissal of Mike Jackson, but their supporters had seen enough. Fast forward three months and it’s no doubt a different story, as Hill’s side has, along with the likes of Bolton and Bradford, seen a resurgence that has seen 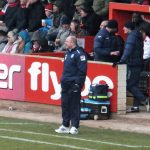 them move into strong promotion contention. James Vaughan, always likely to be a strong performer at this level, now has 21 goals in all competitions, while David Nugent has joined recently to further bolster Tranmere’s attacking options, although he has yet to find the net. Unlike City, Tranmere have been busy this week, losing 1-0 to Sunderland on Sunday in the EFL Trophy final before drawing 0-0 with basement side Grimsby on Wednesday night – so City will be hoping to take advantage of any tiredness.

That 5-0 at the Park was a red letter day for Ryan Bowman, who scored his second hat-trick of the season, the other goals from a Matt Jay penalty and Jake Taylor. The last time City visited Prenton Park was in the 18/19 season and finished 2-0 to the hosts – former City striker James Norwood bagging both goals before Dean Moxey saw red. Tranmere have the lead in head to heads, winning 19 times to City’s 13, five matches finishing level. Details of the last 11 games can be found at https://www.grecians.co.uk/wordpress/?p=9854

Paul Howard has taken charge of just the one Exeter game, the EFL Trophy game against West Brom https://www.grecians.co.uk/wordpress/?s=paul+howard