City made it successive wins on Tuesday night with a confident display at Scunthorpe, meaning Matt Taylor’s side goes into a huge clash on Saturday in confident mood. Taylor has one major selection headache with the return of Tom Parkes from suspension – with Rory McArdle and Alex Hartridge at the back for the last three matches City have kept clean sheets in all three, indeed such has been their partnership that City’s three opponents barely mustered a shot on target between them. Taylor would therefore be well advised to retain this partnership meaning no return for Parkes or the fit again Pierce Sweeney, who returned off the bench late in the Scunthorpe match. With a rare blank midweek ahead there may be less pressure for Taylor to rest players, although Jack Sparkes (who celebrated his first league goal on Tuesday night) and Jake Caprice could be in line for a rotation-driven start. 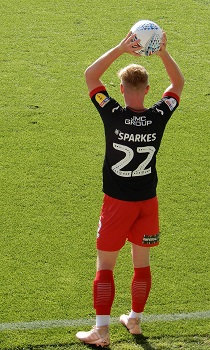 Tipped for promotion at the start of the season, Cheltenham have lived up to their hype, with Michael Duff’s side holding on to their top spot on Tuesday night despite a 3-1 defeat at Mansfield. That brought to an end a run of four straight wins, which Duff hopes won’t lead to another run like after their win at home to City in December following which the Robins failed to win any of their next ten matches in all competitions (albeit winning a penalty shoot-out in the FA Cup to set up an epic tie against Manchester City). Players to watch include top scorer Alfie May (11 goals in all competitions) and the long throws of Ben Tozer, while City youth product Liam Sercombe has recently returned from injury and will be keen to add to his seven goals against his home club. One name no longer featuring is Reuben Reid, the much-travelled former City striker has dropped into non-league with Yeovil.

While Cheltenham usually pride themselves on defensive prowess, it was anything but a defensive display at Whaddon Road in December, as a rollercoaster ride of a match (played in front of fans) finished 5-3 to the hosts to give them their first win over City in 12 matches. City led early on through Archie Collins before Sercombe immediately equalised. By half-time it was 3-1 through May and a Sercombe penalty. Jay made it 3-2 before Williams seemed to seal the points. Law reduced the arrears again before the points were definitely won when Boyle scored Cheltenham’s fifth in injury time. That was a match in contrast with the league encounter at the Park last season, which finished 0-0. Cheltenham’s win three months ago extended their league head to head lead to 10-7, with three matches finishing level. Details of our encounters with Cheltenham can be found at https://www.grecians.co.uk/wordpress/?p=9292

Josh Smith has been the referee in Exeter City games three times, details of those games are shown at https://www.grecians.co.uk/wordpress/?s=josh+smith