Exeter City have confirmed that a friendly game at the Memorial Ground against Bristol Rovers has been organised for Saturday 28th July. Kick off will be at 3pm, and takes place one week before the new football season starts on Saturday 4th August.

The friendly against Taunton has now been moved to the day before, and will kick off at 7.30pm. Matt Taylor has said that both games will be treated as first team games. 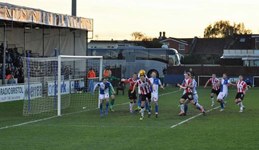 Tomorrow will the draw for the League Cup (Carabao Cup) takes place tomorrow at 9.45am BST in Ho Chi Minh City.  Details of the draw can be found at http://www.exeweb.com/2018/06/12/league-cup-will-take-place-this-friday/

Previous: Jordan Storey Departs for Preston
Next: It’s Ipswich at Home in the League Cup