To the disappointment of many Exeter City fans, the Club and Preston North End have confirmed that they have signed Jordan Storey, aged 20. For some City fans he was their man of the match at the Wembley play off final with Coventry.

As usual the fee is undiagnosed.

Jordan Storey made his debut for the Grecians in the 2016/17 season in the Checkatrade Trophy coming on for Pierce Sweeney in the 4-2 defeat away to Oxford United. He started last season on loan with Dorchester Town, but returned to Exeter after a number of injuries to defenders and then made his starting debut at Luton Town in February in a 1-0 defeat at Kenilworth Road.

Julian Tagg, said on the move:-

We are delighted for Jordan. Despite his limited number of appearances for Exeter City, he made rapid progress last season.

His excellent performances at the heart of our defence is testament to the fantastic background work of our club’s academy, which continues to produce talented and well-rounded young footballers, as well as the excellent efforts of the football management staff and Jordan himself in making the transition to become an integral part of our first team squad. 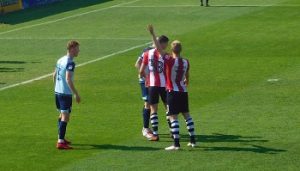 Moments like this are always bitter sweet as we would have loved to have kept Jordan and watched him develop further with Exeter City, but the need to be realistic about an offer as substantial as this was one we felt – when considering the long-term prospects of the club – needed to be accepted.

Both the football management and the club board were unanimous in the decision that this was both the right deal for the player and for the club.

The transfer is testament to Jordan’s hard work,” said Matt. “Eighteen months ago he was very much at a crossroads in his career but he has knuckled down and worked hard. He has really worked at his game and every day he has come in with a mindset to improve.

His physical attributes will mean that he can play at the highest possible level and if he keeps on learning and developing as a centre-half, with the same desire and effort that he has shown at Exeter, then we have got every confidence that he will go on to do himself and our club proud.