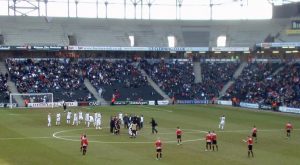 Exeter City has a strong working relationship with MK Dons behind the scenes and will be looking to continue that going forward.

We wish Paul Tisdale all the best in his new role (except for when we play them home and away!)

Speaking to the MK Dons website Paul Tisdale said on his appointment:-

When the owner contacted me we discussed the opportunity for a fresh approach, both on and off the pitch.

We have a shared vision for the Club and want to build a unique environment and culture – one which will best enable the players to perform and become part of a winning football team.

I am excited by the Club’s ambition and relish the challenge of guiding MK Dons to fulfill its undoubted potential.

The fixtures list will be released on Thursday 4th June at 9am, no doubt the two fixtures between Exeter and MK Dons will be of part interest to many Grecians.