City earned an unexpected break when Tuesday night’s trip to Port Vale was postponed and, while that postponement will lead to a pretty congested fixture list (City have up to three games in hand over everyone else), it will at least have given Paul Tisdale’s beleaguered squad a chance to recuperate and for some of the walking wounded to have a few extra days’ rest

in their legs. It’s at the back where the problems continue, but it’s surely a matter of time before the likes of Troy Brown, Troy Archibald-Henville and indeed Luke Croll are back in consideration. Up front loanee Ryan Loft impressed in the U23s on Sunday while Ryan Brunt made his first semi-competitive appearance since breaking down at the start of the season, and both will be pressing for a place on the bench.

With an ambitious chairman who puts his money where his mouth is and a larger-than-life manager in Steve Evans, promotion is expected of Mansfield, and there are signs in recent months that the Stags are just moving into gear at the right time, culminating in a 5-0 thrashing of cup heroes Newport on Tuesday night. That was a return to form after a 1-0 defeat at fellow high-fliers Swindon on Saturday, which was Mansfield’s first league defeat since early December. Alfie Potter played a starring role with a hat-trick on Tuesday night, but it’s 16-goal Danny Rose who is likely to be the biggest goal threat, while Alex MacDonald has always proved a tricky customer. Former City keeper Bobby Olejnik moved to Mansfield in the summer but the Austrian has been kept to a single league appearance as understudy to Conrad Logan. 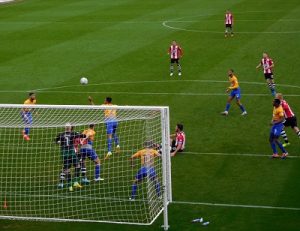 The reverse fixture back in October saw Lee Holmes rescue a point in the dying minutes after Kane Hemmings put Mansfield ahead in the first half (match detail here). The drama wasn’t done there as Kane Wilson, on his full debut, saw red for kicking the ball away, while Jordan Storey, on in the 89th minute for his league debut, hit the woodwork with his first touch. The corresponding fixture last season saw City finally record their first home win (in December), a brace from Ollie Watkins sealing a 2-0 win in a match that saw Mal Benning sent off for the visitors. City hold the league head to head lead with 23 wins to Mansfield’s 20 (18 draws).

Chris Sarginson will probably be best remembered by Exeter fans for being in charge of the Play Off semi-final at Plainmoor. A list of the 18 Exeter games that he’s officiated at can be found at http://www.grecians.co.uk/wordpress/?s=sarginson&paged=2