Given it took City until the new year last season to record two home wins, to have matched this after the first two games of this season (with clean sheets both times) seems to bode well. The 1-0 win over Lincoln won’t live particularly long in the memory but the points are more important, especially given the congested treatment room. Paul Tisdale has noted that Jordan Moore-Taylor has recovered and is 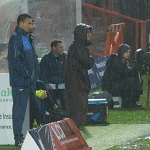 expected to feature, while David Wheeler is possibly returning, but Ryan Harley and Dean Moxey remain out for the time being. Moore-Taylor’s return would likely be at the expense of Luke Croll, while depending on the formation chosen Wheeler or Lee Holmes would hope to start in place of Troy Archibald-Henville, despite the latter impressing in a defensive midfield role in what was seen as very much a “horses for courses” selection.

Installed once more amongst the predicted strugglers, Cheltenham have done little in the opening weeks to cause any change of heart, with two wins (one an extra time victory at Oxford in the EFL Cup) and four defeats in their opening six fixtures in all competitions. Gary Johnson’s side has the added burden of having played on Wednesday night in a 2-0 defeat against West Ham in front of the TV cameras. Johnson was reasonably busy in the transfer market in the summer, 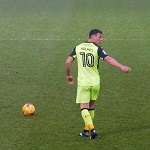 with one player in particular, Mo Eisa, catching the eye having signed from a prolific spell at Greenwich Borough. Eisa has settled in very quickly at the higher level with four goals in five games in all competitions. Other players to look out for include the giant midfielder Harry Pell.

Where once Cheltenham were City’s bogey side, it is fast becoming the other way around with City having won the last four meetings. Last season’s corresponding fixture shortly before Christmas saw City make the better of horrible wet conditions to win 3-1, with all the goals in the second half. Lee Holmes put City ahead with a stunning strike which was cancelled out by Billy Waters, before David Wheeler’s late brace sealed the points. Gary Johnson was absent from the return with illness, as City completed a routine 3-0 win

through a Reuben Reid double (one penalty) and Jake Taylor. Cheltenham, thanks to winning the first nine fixtures between the sides, remain comfortably ahead in head to heads with nine wins to City’s four (one draw).

The 26 year old from Cumberland is in his first season in the English Football League. He refereed last season’s National League play off final between Tranmere and Forest Green. In his four games so far this season he has booked 10 players, but hasn’t seen red yet.

Previous: Next Up: Exeter City vs Lincoln City
Next: West Brom’s Kane Wilson in on Loan