Kane has represented England at under-16 and under-17 level and is currently away on duty on duty with England so will link up with the Exeter City squad next week. 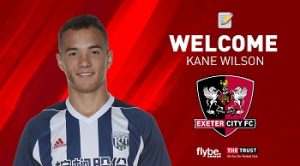 The 17-year-old comes to St James Park with a growing reputation having made his debut for West Brom in the EFL Cup last season and also played two games for the club in EFL Trophy last campaign.

City’s assistant manager Matt Oakley, who has been working with West Brom on the transfer, said:

Kane was on the bench for West Bromwich Albion against Stoke on Sunday so to have him with us shows the respect, faith and trust Tony Pulis has with allowing him to be part of our squad.

He’s a good athlete, he has great touch and great composure. I really do think he has a bright future.

Previous: Next Up: Cheltenham Town vs Exeter City
Next: David Wheeler Joins QPR