With City having dropped back into the bottom two following the late defeat at Wycombe, attention turns back to trying to arrest their alarming home form with the visit of a side making a welcome 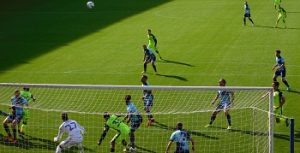 return from the wilderness of the National League. Paul Tisdale has stated that most of the injured players are still no nearer a return bar Joel Grant, who could be fit to play some part on Saturday, while David Wheeler has another week of training under his belt as he continues his return. Tisdale, in an attempt to find that winning formula, may look to make some changes with Pierce Sweeney perhaps returning, although it seems it’s further up the pitch where the problems mainly lie as City have found goals hard to come by, and Reuben Reid will continue to look for his first goal in City colours.

A club the size of Grimsby should never have dropped out of the Football League, but drop they did and they found it very difficult to get back before finally clinching promotion via the playoffs last season,

and the Mariners after a tricky August bounced back in September with three wins and a draw from five league matches to earn manager Paul Hurst a nomination for Manager of the Month. Successive defeats, the latest on Tuesday night in the Checkatrade Trophy in front of a mammoth crowd of 609 against Leicester U23s, have checked their progress but Hurst brings his charges down to the South West sitting pretty in the top half of the table. The departure of the National League’s 15/16 top scorer Padraig Amond to Hartlepool has opened up the way for Omar Bogle to assume the role of deadly striker, Bogle currently has nine to his credit, more than City have managed so far in their entirety. Further experience is provided by players like Luke Summerfield, a player very familiar to supporters of Football in Devon having started his career down the A38.

The last season the sides were in the same division was 08/09 and, despite City’s promotion and

Grimsby only just avoiding relegation, the spoils were shared with a pair of draws. The corresponding fixture ended 0-0 (match details)while the return, in a fixture the Football League forced City to play despite all travel advice in Devon saying not to leave the house, ended 2-2 – goals from Stewart and Harley sandwiching a brace from Nathan Jarman. Grimsby hold the Football League head to head lead with 11 wins to City’s 7 (6 draws).

The match officials for the game will be:

He’s refereed just the one Exeter game, which was the season opener away to Blackpool, match details here.

Previous: Next Up: Wycombe Wanderers vs Exeter City
Next: FA Cup 2016/17: First Round Draw Ball Numbers