After the elation of City’s stunning 10-man victory at Stevenage, it was back down to earth with a bump on Tuesday with a 2-0 reverse against Notts County to continue City’s home form that is now reaching for new pejoratives to describe it. Another away match, albeit at a club that always ensures a tetchy game, will be some relief to Paul Tisdale and his side. 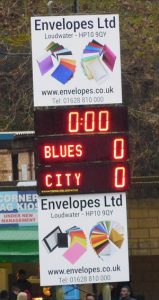 Jordan Moore-Taylor returns to the squad after sitting out Tuesday following his red card at Stevenage, and he will expect to come straight back into the side – perhaps at the expense of either Luke Croll or Craig Woodman. Tisdale may consider three games in a week too much for new signing Reuben Reid, which may mean a return to the starting line up for David Wheeler.

After their surprise run to the playoffs two seasons ago, last season saw Wycombe’s form tail off somewhat and this has been a difficult campaign so far for Gareth Ainsworth’s side. Ainsworth has typically operated with a small squad augmented by the loan system, which may run into trouble with the new loan rules especially as Wycombe’s injury problems have been akin to those faced by Tisdale. This led to Ainsworth himself coming on (and setting up a goal) in the EFL Trophy match against Northampton.

Their home form has held up, however, culminating in a 5-1 thrashing of Crewe on Tuesday night which ensures very different moods in each camp going into Saturday’s encounter. Goals have once again been a problem despite that result, with Paul Hayes leading the way having scored three in all competitions. Scott Kashket scored twice off the bench on Tuesday and will be one to watch should he be given a start. Another player to watch (it will be difficult to miss him!) is Adebayo Akinfenwa, the behemoth striker who was snapped up after he left AFC Wimbledon in the summer.

Wycombe took the honours last season in both fixtures. The corresponding fixture finished 1-0 thanks to a stunning strike from Stephen McGinn, while goals from Jacobson and Thompson gave the Chairboys a routine 2-0 win at the Park. Those victories ensured Wycombe now have the lead in Football League fixtures with six wins to City’s four (four draws).

We’ve met Kinseley a few times, firstly when he refereed the televised game at home to Hereford in 2005, in the Conference. The fill list of Exeter games he’s taken charge of can be found at http://www.grecians.co.uk/wordpress/?s=Nicholas+Kinseley

Details of Exeter’s last match at Adams Park can be found at http://www.grecians.co.uk/wordpress/?sp_event=4082

Previous: Luke Croll Makes the EFLs Team of the Week
Next: Next Up: Exeter City vs Grimsby Town