With City able to enjoy a weather-enforced week off thanks to the storms in the north west rendering the Morecambe pitch unplayable, Paul Tisdale will be hoping the break has eased some of City’s injury woes. Most

noteworthy is the news that Will Hoskins has returned to training, although it is unlikely he’ll be risked for a while yet, while City may be able to pick from at least a couple of midfielders unless Tisdale decides his 5-0-5 “schoolyard swarm” formation is worth another go!

Given their status as one of the big spenders in the division, regularly racking up 7-figure losses in a bid to move further up the leagues, that Luton visit City in 17th place in the table is something of a shock, and the Hatters visit the Park on Saturday on the back of four straight defeats (including one in the FA Cup), a run which today has cost John Still his job. Andy Awford has been named caretaker manager. Their last two home fixtures have both yielded 3-4 defeats while Luton haven’t scored an away goal in the league since their 2-0 win at Dagenham at the beginning of November. Their key signing in the summer was Craig 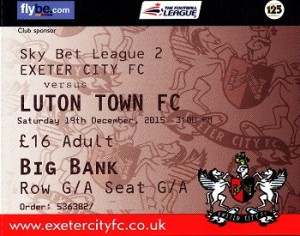 Mackail-Smith, who had played under Still at Dagenham, but he hasn’t scored since mid-September. In better form is another ex-Dagenham veteran in Paul Benson, who scored twice in the 3-4 defeat to Northampton last week.

Last season, Luton’s first back in the Football League, saw City come from behind in both matches to take four points from six. The corresponding fixture saw Luton take an early lead through Scott Griffiths before Tom Nichols equalised from the spot after Christian Ribeiro, fresh from accepting the club’s Player of the Month award from your correspondent, was felled in the box. The return fixture at Kenilworth Road on Good Friday was more dramatic as the hosts led 2-0 at half time through Guttridge and Cullen, only for City to storm back with goals from Harley, Moore-Taylor and Wheeler to claim a stunning 3-2 win. It’s the Hatters though with a vastly superior Football League head to head record with 23 wins to City’s 11 (12 draws).