Exeter City Football Club again celebrated diversity in the local community by holding a football tournament that attracted players from across the globe. The 6 a side competition was organised by Exeter City Supporters Trust’s One Game One Community Group and Exeter City’s Football in the Community team. It took place at the University of Exeter’s Streatham Sports Complex, yesterday Sunday 26 July. 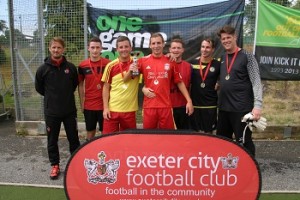 Torquay based Crispy Pigs beat Not a Kalou from Ipplepen 2-1 in a closely fought final. Ashley Dewdney scored both goals for the winners as they came from behind to edge victory.

After a group and knock out stage, the Semi Finals saw Not a Kalou beat the Devon Lions, Devon’s gay friendly football team and Crispy Pigs defeat one of the two teams entered from the racial harmony charity, Plymouth Hope. There were also players at the tournament from RISE, the local organisation for people with drug and alcohol issues.

The Fran Jenkin Fair Play Award, set up in memory of the founder of the tournament, went to the Devon Lions. 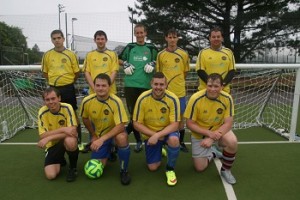 Support for the tournament came from the University of Exeter, Exeter City Council, Devon FA, Tesco, Kick it Out, Exeter City Football Club Football in the Community and Exeter City Supporters Trust.

The tournament was launched by Exeter’s Lord Mayor, Councillor Olwen Foggin in the presence of Julian Tagg, Chairman of Exeter City FC Board of Directors and first team players Christy Pym and Ollie Watkins.

Exeter City’s One Game One Community Group is part of the national Kick It Out campaign which aims to address all types of discrimination in football including race, disability, gender, age, religion and sexual orientation.

“Yet again Exeter City has reached out into the community and put on a tournament enjoyed by a diverse range of teams and players” said One Game One Community Co-ordinator Martin Weiler.