The official videographer for the Exeter centenary trip to Brazil has days left to raise the £1000 he needs to be able to go to Brazil and record the trip for posterity. There’s 8 days l 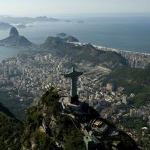 eft for him to get the funds, and he needs the help of Exeter City fans everywhere to raise that money. Or can Exeter based companies help him with sponsorship?

Local film maker, Dan Wiseman of Wiseman Productions, is determined that there will be a long-lasting video document to preserve the event for future generations to come. He has the support of Exeter City Football Club, which has agreed that he can be spend time with the team in order to capture the best record possible for posterity. Dan hopes to raise enough money to fund the costs of the trip with the help of an online crowd funding campaign. The team fly out on the 17th of July and so the clock is ticking.

Knowledge of the Grecians being the first team to play the Brazil international team has spread thanks to the World Cup. Even Waitrose have got in on this act with mention of that historic game on their bottle of Brazilian Shiraz. That knowledge needs to spread further if Dan is to be helped.

Further information and how to contribute can be found at https://www.indiegogo.com/projects/the-city-that-took-on-a-nation