Day 19. Second set of matches in the round of 16 took place last night, and Costa Rica beat Greece in the 2nd set of penalty deciders of the tournament, while Holland needed an injury time penalty to over come Mexico.

News
Uruguayan forward Luis Suarez has apologised to Giorgio Chiellini for biting him. Suarez said in a statement:-

The truth is that my colleague Giorgio Chiellini suffered the physical result of a bite in the collision he suffered with me.

It’s unlikely that Holland’s Arjen Robben will face any sanction after admitting to Dutch television that “In the first half I took a dive“. 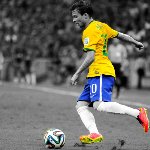 Netherlands v Mexico
Miguel Herrera, Mexico coach
I think that the team have played well this whole World Cup. We’ve achieved some very good things, but nobody can take away the bitter taste of this defeat. We did a good job but made mistakes, while the Netherlands did a great job to hold on, keep fighting and finally turn the scoreline around. But this wasn’t the Dutch team everyone’s been talking about, this is a side that’s vulnerable and can be beaten. In physical terms, we never dipped, we were solid and we fought to the final whistle. In my view, my players were extraordinary.

Louis van Gaal, the Netherlands coach
I have to give credit to my players: I think they were in much better shape and much more focused than our opponents. They never stopped believing, right to the end. They showed belief and a lot of confidence. We took advantage of the water break to tweak our system and created loads of chances, some of them denied by the woodwork and others by a keeper who has been fantastic. [Wesley] Sneijder is one of the most on-form players in my team: he’s the one who covers most kilometres and his technique is outstanding.

Costa Rica v Greece
Jorge Luis Pinto, Costa Rica coach
This is a big, big result. Words can’t describe how I feel right now. It’s never easy playing with ten men, and even less so against opponents like that in a World Cup match. We looked secure throughout the game, and we were full of confidence in the shoot-out, and that goes for the goalkeeper, who was amazing, and the penalty takers, who were just perfect. I’ll say it again – we’re delighted and we’d like to dedicate this win to all the people of Costa Rica. We respect the Netherlands, just as we respect all our rivals, but the story goes on and we’re hungry for more.

Keylor Navas, Man of the Match
I’m happy and grateful to God for this feeling after another important win for us and the whole country. It was not an easy game at all, and while there were times when we had control, there were also periods when the opposition were on top. Obviously being a man down made a difference, but we never gave up. As for my save at the end, I can’t remember what was going through my mind. All I did was react and keep it out. You can practise penalties and study what the takers do, but I have to hand it to my team-mates, who were 100 percent on target. We’re making history and we want to have a place in people’s hearts forever.

Fernando Santos, Greece coach
I don’t like talking about good luck or bad luck. Someone has to be lucky and tonight it was them, and I congratulate them for that. I think Costa Rica were the better side in the opening 15 minutes, but then we came back into it. We had to go and take more risks after the goal, but they defended well and tried to hit us on the counter. In the end, though, we managed to take the game into extra time, when we put pressure on them but weren’t sharp enough, which is perfectly understandable when you’re tired and tense. Navas was brilliant. Without him, the outcome would have been different.