Exeter City have confirmed that midfielder Arron Davies and rookie goalkeeper James Hamon have signed on with the Grecians for the 2014/15 season.

This will be Arron’s 3rd season with Exeter City having signed from Northampton Town in June 2011.  He’s played 72 times for Exeter scoring 5 times. The most memorable goal coming last season with a 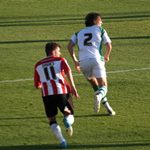 strike from the touchlines in City’s 4-0 win at Scunthorpe United. Davies didn’t feature in the latter stages of the season.

Arron Davies, ages 30, without doubt started last season well. He’s never going to be the star player and a lot of his game play will go unnoticed by fans. He’s been an easy target by fans who want someone to blame for any ills suffered by the Grecians, though a goal against Plymouth Argyle in the Devon derby should have made fans adopt him and give him some sort of legendary status, but then he comes up with a wonder goal at Scunthorpe. However, he hasn’t won over the minds of Exeter fans.

Davies also played in a number of positions last season, and started a number of games at right back in order to help protect the defence at the start of the game, before reverting to his normal position on the wing, and the games where City had Wheeler on the opposite wing gave some excitement to the fans.

James Hamon, aged 18, is an unknown quantity for most City fans. Expected to be the understudy to Christy Pym for the places between the sticks the Guernsey born ‘keeper has been involved in the first team match day squad on a number occasions, and has featured in a number of the under 21 games last season. We reported his signing here.