Home » Exeter City News » League 2 News » Next Up: Barnet Away

Another day, another 2-1 defeat. City will be looking to get their season back on track after successive defeats with a trip to bottom club Barnet on Tuesday night. Just as the injury list seemed to be easing it was added to again with young midfielder Scot Bennett stretchered off against Bristol Rovers – fortunately not as first feared with a broken leg but it’s a blow in any case to lose someone who looks like he has been bossing midfields for years. 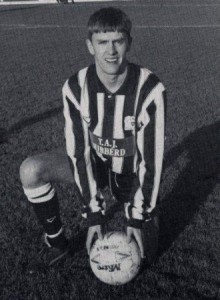 Death, taxes, Barnet finishing just outside the relegation spots following a last-day escape…the “other” Bees have diced with relegation back to the wilderness of non-league on several occasions since they returned to the Football League in 2005. Usually their escapes have involved Martin Allen at some point, but they declined to invite him back this season, Allen decamping to Gillingham, and instead have chosen a rookie manager whose face will be familiar to City fans – Mark Robson, who following his time at City spent time pulling the strings in midfield at clubs such as West Ham and Charlton. It remains to be seen whether his cultured style of play transfers itself into aesthetic Football. Barnet will have to do without ex-Arsenal goalkeeper Graham Stack after his red card in the 2-1 defeat at Fleetwood on Saturday, but expected to feature will be Jon Fortune, who spent the tail end of last season trying in vain to help keep City in League One. Veteran John Oster is likely to pull the strings in midfield.

City just edge the head-to-head with 9 wins to Barnet’s 8 (and 8 draws), and took all six points during the glorious 08/09 season – Matt Gill scored the only goal of the game in front of a travelling support just shy of 1,000 at Underhill, while back at The Park a Neil Saunders wonder goal and Gill again sealed a 2-1 victory (62 year old Paul Furlong with Barnet’s goal), Paul Jones saving a penalty to keep City in front late on.

We wrote about Mark Robson taking over at Barnet, here.

Our guide to Underhill, pubs, trains and cars is here.

Not shy with his cards! Last reffed us away to Southampton, New Year’s Day, 2011.

Previous: My First Match Had Exeter City as the Opposition. The Thoughts of Grimsby Les
Next: Grimsby Les Meets the Grecians Again, the1989/90 Season