October was another busy month, 7 games including a JPT tie. It also saw the launch of the Siege Army.

The inclusion of Matt Oakley on the team, spurred on City to a rare win. Oldham visited the Park on Saturday 1st October. The Western Morning News said:

Not only was the win welcome, but the performance also. The Grecians turned in perhaps their most accomplished performance of the npower League One season so far to see off the Latics with a showing in which there were a number of impressive individual performances.

Nardiello, who had previously been on loan at Oldham, notched a goal, and the Spaniard Guillem Bauza claimed early in the 2nd half.
City 2 Oldham 0. Att: 3,753

After victory over Argyle in the previous round, we’d been given another home tie. This time against Swindon Town, a Tuesday evening early kick off on 4th October. Jake Taylor unavailable due to international duty. Swindon were 2-0 up at half time, the 2nd from a howler by Artur when receiving a back pass from Troy. Nardiello scores a goal later on, that was to feature in the JPT’s top 10 later this season. The Western Morning News comments on the goal:

Nardiello got Exeter back into the game with a beautiful goal. He dummied his marker and sent a sublime chip from the edge of the penalty box over Lanzano and into the far corner 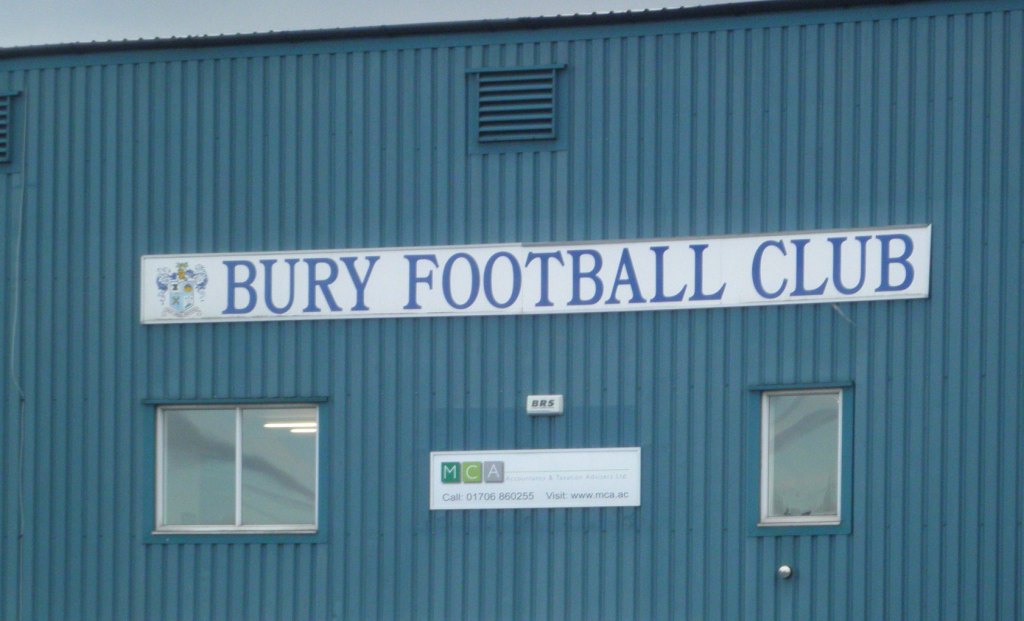 Saturday 8th meant a trip to Bury. 1 win there in some 70 odd years, came 3 seasons ago. Current form suggesting that a win would not be happening, but maybe the first away goal of the season?

Peter Sweeney’s delivery was good, bang on the six-yard line and in the middle of goal, and Andy Bishop headed in from six yards. Simples. Artur Krysiak was rooted to his spot, but the ease in which the unchallenged Bishop scored was embarrassing.

Back home on Saturday 8th, with Huddersfield the visitors. Would the Grecians be able to keep the prolific Jordan Rhodes quiet? But wasn’t to be. Exeter’s defence wasn’t up to the job. The thoughts of the WMN:

The frustrating thing for Exeter was that, for the first 20 minutes of the second half, they had been the better team, creating a host of chances. They were just unable to take them. And that third goal really did end any hopes of an improbable comeback.

Saturday 22nd was the second home game in a row. Our luck must be due for a change by now? Rochdale the visitors. 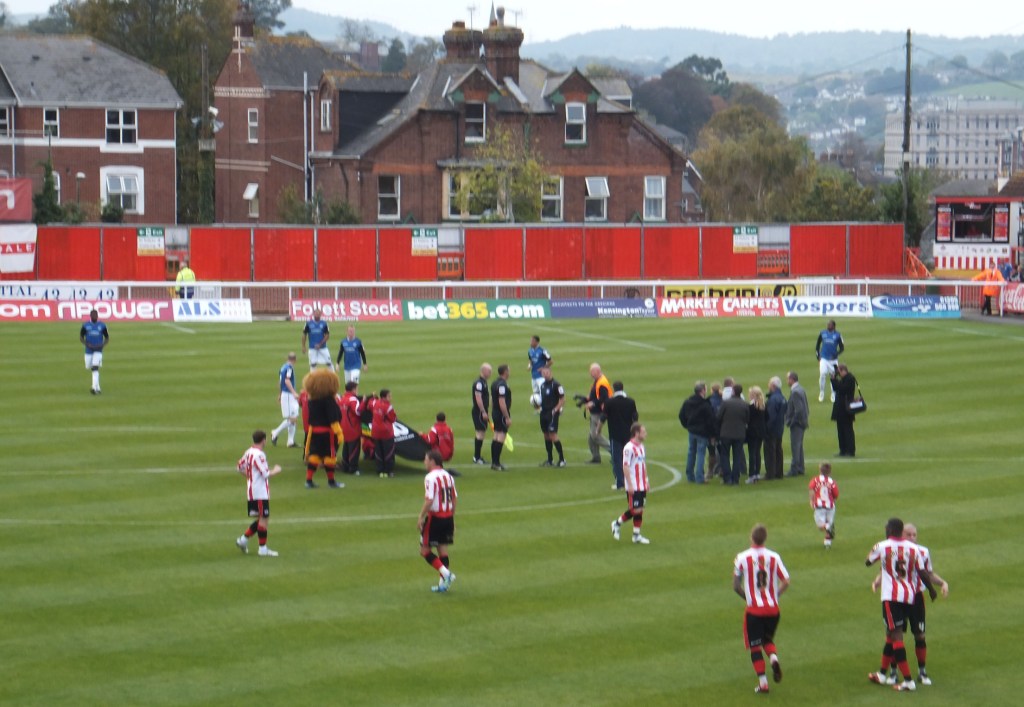 Tisdale keeps faith the team that lost to Huddersfield. In front of a small home crowd the fans frustration know no bounds, as Rochdale took the lead and held on to it till just before half time when Nards got an equaliser. In the 2nd half Taylor earned a penalty which was tucked way by Nardiello, and then 10 minutes before full time, Jake Taylor scored his maiden profession 1st team goal. The WMN reported:

Taylor was causing no end of problems with his persistent running. Post-match, Tisdale mentioned that his work-rate was “like that of two men, which is important for Exeter City.” It is hard not to draw comparisons with Jamie Mackie and the late Adam Stansfield. He may not get the goals of a Jamie Cureton, for example, but he is a selfless team player, which is why the comparisons ring so true.

Tuesday 25th sees a visit to the Midlands to Walsall. The full début of the Siege Army, to provide the players and fans with a siege mentality. A recognition of the problems we faced by being in the relegation zone without an away win or an away goal. It worked! The WMN reported:

The City striker took his haul for the season to seven with both goals, but he was a thorn in Walsall’s side all night with as good a performance as he has enjoyed in a red and white shirt.

So, a brace for Nardiello and the first 3 points and goals for the Grecians on the road this season.
Walsall 1 City 2. Att: 4,003

A trip to Brammall Lane for City fans on Saturday 29th. Quite a day to remember. City going in to the game wit 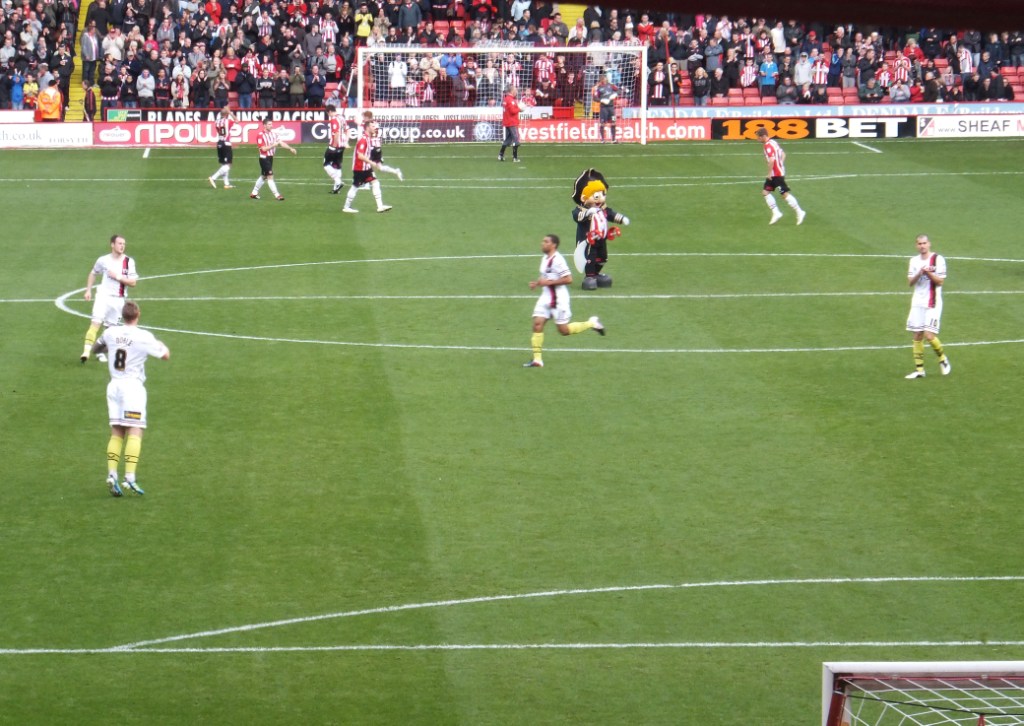 h back to back wins, having finally scored away. However the opposition was Sheffield United, one of the favourites for automatic promotion. A kit clash meant that the Grecians had to borrow socks from the home team, these being yellow ones to go with City’s normal white away kit.

After 23 minutes the Grecians were 2-0 up! Goals by Nardiello and Noble. Before half time Golbourne and Stephen Quinn clashed after some rough play by Quinn and the ref missed Golbourne retaliating by heading Quinn in the chest. Just before half time the Blades pulled it back to 2-1.

The second half started well for Sheff Utd and by 70 minutes were 3-2 up. O’Flynn made it 3-3 on 82 minutes, only for the Blades to make it 4-3 3 minutes later. Dunne, however, made it 4-4 on 85 minutes, and despite chances to win it by both teams, that was the final score. A totally memorable day for the 630 Grecian fans. The WMN said:

Sometimes you get a reminder as to why you love football. Saturday’s trip to Sheffield United proved just that for Exeter City, who came away from chilly Bramall Lane with a share of the spoils after an eight-goal thriller.

October was a far better month than had been seen so far this season. 10 points out of 18, meant that City crawled out of the relegation zone and finished the month in 19th. In other good news, Dan Nardiello scored 7 goals in October.