City’s recent revival met with the new manager bounce at Portsmouth and, after a first half where City pressed but couldn’t find a way to goal, Portsmouth seized the initiative in the second half to win 2-0 albeit with City denied what looked a strong case for a penalty at 0-1. Gary Caldwell will now have to rally the troops for a midweek tussle against a side challenging for promotion. Caldwell sprung a couple of 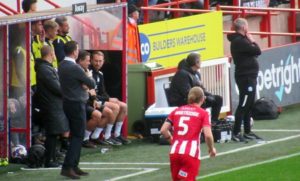 surprises with his starting eleven on Saturday – while Joe White coming in wasn’t necessarily surprising, the benching of Archie Collins in favour of Kegs Chauke was, and Collins is likely to return on Tuesday night having started every league game prior to Saturday. There remains talk of new signings in the window, but whether these take place ahead of Tuesday night remains to be seen.

Finding themselves in the third tier just a season after they almost reached the Premier League, Barnsley are determined to return to the Championship as soon as possible and, following a return to winning ways with a 3-1 win over struggling Accrington on Saturday, Michael Duff’s side are currently occupying the final playoff spot. Defeats to Bolton and Charlton (sandwiching a reverse at Derby in the FA Cup, the reason this match is taking place on Tuesday night) had ended an 8-match unbeaten league run. Duff has been busy this January, making one permanent (Barry Cotter) and two loan signings (Bobby Thomas and Max Watters) – Watters in particular has a lot of pedigree in front of goal, and augments a forward line that includes Devante Cole and former City striker James Norwood.

The reverse at Oakwell was supposed to be a home banker – City had lost their manager and Barnsley had won their previous four games – but Jay Stansfield struck his first goals for City at the start of each half to seal a surprise 2-0 win for City. Your writer was barely out of nappies when Barnsley last made the long trip down to face City, winning 1-0 in November 1980 on their way to promotion. City do, however, hold the lead in league head to heads, with ten wins to Barnsley’s seven, four matches finishing level.