Having been served a couple of treats already, it’s perhaps unsurprising that Sky should want to fill its denuded schedule with a third helping of City, and so it is that the much-anticipated visit of Ipswich will be played out in front of the TV cameras. City’s injury worries have continued to ease with Jonathan Grounds having come off the bench in the thrilling 3-2 win over Peterborough last week and, with Cheick Diabate also thought to be not far from a return, Gary Caldwell may at last be able to field a full contingent of centre backs thus allowing Josh Key to move further forward. Assuming normal loan rules, Rekeem Harper will be watching from the stands as he won’t be able to play against his parent club. An injury to Sonny Cox meant Mitch Beardmore was again on the bench, and his goal in City’s FA Youth Cup win over Forest Green may mean he keeps his place on the bench.

For a club that has in the past been 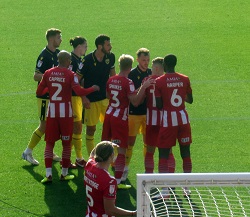 winners in Europe to be in its fourth season in the third tier is simply not good enough, but Ipswich under Kieran McKenna are starting to emerge this season amongst the favourites to go up and go into Saturday’s match in 2nd place in the table. McKenna was able to strengthen in the summer with players of pedigree like Freddie Ladapo, Christian Walton, Marcus Harness, Richard Keogh and Dominic Ball coming in, although the latter has recently been ruled out with a long-term injury. Goals have been shared around with Ladapo scoring eight in all competitions and Conor Chaplin six. One player hoping to feature will be Kyle Edwards, who has featured sporadically but will be keen to remind City supporters of the quality he showed on loan in 2017/18.

There have been cup encounters between the sides in recent years, most recently a surprise 2-1 win for City as part of the run to the semi-finals in 2019/20, but the last league matches took place way back in the 1956/57 Division 3 (South) campaign. An Ipswich side managed by Alf Ramsey pipped Torquay to promotion to the second tier on goal average, helped by taking maximum points from City – the corresponding fixture finished 2-1, while Ipswich were comfortable 3-0 winners at Portman Road. Those wins gave Ipswich the lead in league head to heads with eight wins to City’s six, eight matches finishing level.