If you had said prior to Saturday’s match, given Barnsley’s form, the loss of City’s manager to Rotherham, and the ongoing injuries compounded by club captain Matt Jay needing to head back home for family reasons, that City would come away from South Yorkshire with a comfortable 2-0 win, many would have asked for some of what you’re on. However, Jay Stansfield’s double at the start of 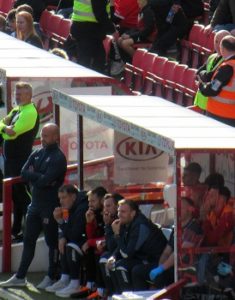 each half ensured the 475 fans who defied the rail strike to attend left in a state of delirium. Kevin Nicholson and Jon Hill take charge once again for City’s rearranged match in the capital on Tuesday night with the supporters edging towards wanting the former Torquay player to get the job on a permanent basis ahead of the recruitment cycle closing in the next week or so. City remained depleted at Barnsley, Jay’s departure meaning a bench of six players, all but two of whom teenagers – a couple of City’s senior players are thought to be back in training but whether they are fit to return even to the bench on Tuesday night remains to be seen, so it’s likely to be an unchanged side for the fourth successive fixture.

When City were due to play Charlton back in early September, the Addicks had just suffered only their second defeat of the season and were looking set for a good season. However, they have since firmly established themselves as draw specialists, with four draws and a defeat in the five league matches (plus defeat to Colchester in the EFL Trophy) since then to slide down to 18th in the table amidst growing unrest from the supporters. Ben Garner, who if the rumour mill is to be believed pipped Matt Taylor to the job in the summer having done a good job at Swindon, is under increasing pressure to deliver, with a change in formation failing to deliver the goods in a 0-0 draw at Lincoln on Saturday. One player who stood out early on was loanee Jesurun Rak-Sakyi, while up front will be the familiar face of Jayden Stockley, who was a City favourite in his two spells with the club firstly on loan and then permanently before Preston snapped him up. Miles Leaburn, son of “Big” Carl Leaburn, will also expect to feature at some point.

While the last fixture between the sides was in the 2017/18 EFL Cup (Charlton winning 2-1), the sides last met in league competition in what was a very contrasting 2011/12 season – Charlton picking up all 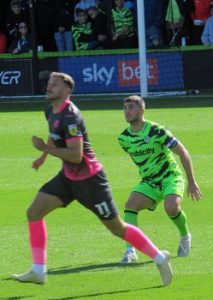 six points as they broke the 100 point barrier on the way to the title while City limped to relegation. The corresponding fixture turned on the sending off of Dan Nardiello early on for debating the non-award of a goal (which pictures suggested should have been awarded) with the linesman rather too vehemently. Bradley Wright-Phillips and Dale Stephens in the later stages of each half sealed a 2-0 win, while Danny Green scored the only goal in a 1-0 victory at the Park. Those wins extended Charlton’s league head to head lead to 13-10, five matches finishing level.

Craig Hicks last refereed City in January this year when Exeter beat Scunthorpe 2-0 at the Park.