It may have been tough to watch at times, but City completed the job on Tuesday night with a 2-1 win against Barrow that sparked joyous scenes that no doubt everyone has enjoyed viewing a hundred times since. As a result, for the first time in a number of years City’s fate is decided with two games to spare, although Forest Green’s defeat at Swindon has brought into play the very real possibility that Matt Taylor’s side could lift the League Two trophy in just over a week. Therefore while Northampton and Port Vale fans would be hoping that City may ease off the throttle, you can bet that Taylor will have his side fired up, while any thoughts of squad rotation will also go out of the window while the 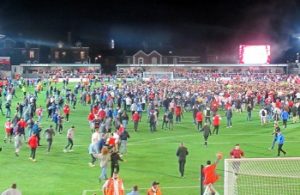 trophy is in sight. In terms of how City will line up, Taylor has one particular selection quandary up front – Offrande Zanzala has been generally the first choice in recent games, but Kieran Phillips deputised on Tuesday night and scored the equaliser, so will hope to keep his spot – while Sam Nombe too is back in contention having featured off the bench against Barrow. Elsewhere any changes will only be precautionary or to keep players fresh.

After a shaky spell that threatened to consign them to the playoffs, Northampton have come back into form at precisely the right time, and go into Saturday’s match on the back of three straight wins, usurping Port Vale last Saturday with their 4-2 win at Leyton Orient. Jon Brady’s Cobblers could clinch promotion on Saturday if they win, although that would require Port Vale and Mansfield to lose and for Bristol Rovers to draw or worse. The fact Northampton have scored nine goals in their last three games suggests the main issue that has held them back – scoring – appears to have been addressed, and City will need to be particularly careful at set pieces, as anyone who has watched Northampton’s highlights this season will see they score a large proportion of their goals from set plays – hence Jon Guthrie is the second top scorer with eight alongside Mitch Pinnock, and just behind top scorer Sam Hoskins on 11. Elsewhere there will be a familiar face on the bench in Jonny Maxted, who was well-regarded in his two seasons at City before moving to Northampton after his release last summer.

It’s fair to say City’s record against Northampton, a club they’ve played more than most over the years, is pretty dreadful especially away from home – with just one win at Sixfields in 2013/14, which in itself was the first away win for City in this fixture since the early 70s. The awful memories of Wembley in 2020 still feature heavily, while City’s last visit to Northampton was in February 2020 and saw the hosts cruise to a 2-0 win (Oliver, Hoskins pen). Northampton took advantage of City’s blip in form in December to record one of just two home defeats on Taylor’s side – Sowerby gave the Cobblers the half time lead, Amond equalised but Pinnock netted the winner. Northampton are way out in front in league head to heads with 50 wins to City’s 29, 30 matches finishing level.