City’s promotion charge suffered a setback at Tranmere on Easter Monday – never a particularly happy hunting ground especially as Tranmere were the sort of big, physical side that City often come unstuck against. The next few days are ever more crucial therefore as City have home matches against two sides in the lower reaches of the table, and wins in both could mean by this time next week City may be a League One side. One name hovering closer to inclusion is Sam Nombe, who after an injury-plagued first season at City is back in training and may feature. Elsewhere skipper Matt Jay, benched at 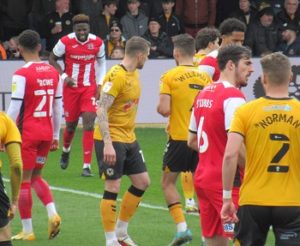 Tranmere, is likely to come back in for Callum Rowe as Taylor looks to pick what he considers to be his strongest available side.

Back at this level for the first time in nearly a decade, Rochdale haven’t exactly pulled up many trees, never really troubling the scorers at either end although a 7-match winless run in March did briefly threaten to drag Dale into the relegation dogfight. A better run of one defeat in their last five put paid to any lingering thoughts of a second straight drop, although manager Robbie Stockdale will know that much more will be expected next season albeit with fairly limited resources. That said, Stockdale made no fewer than five permanent signings in the January window, seemingly to little avail. Unlike last season where Rochdale were your banker in a “both teams to score” bet, goals have been something of an issue, not least since Jake Beesley left for Blackpool in January – Beesley is still Dale’s top scorer with nine league goals (12 in all competitions), while Tahvon Campbell, brought in from Woking to add firepower after Beesley’s departure, has managed just two so far. One familiar face was seen celebrating a goal in Rochdale’s 2-1 win over Hartlepool on Monday – Jimmy Keohane, whose last appearance at the Park saw him score a stunning goal in his final match for City. Subsequently released by Woking, Keohane returned to his native Ireland before surprisingly heading back to England and League One where he often turned out as a full back rather than the attacking midfielder City supporters knew. Having missed the reverse fixture with a long-term injury, Keohane will be desperate to play and try to put a dent in City’s promotion hopes.

The match at Spotland finished 1-1 – George Ray scored for City only for the lead to last just ten minutes before Max Taylor equalised. That ended a run of three straight defeats in this fixture for City, the last match at the Park being in a season of contrasts, Jamie Allen’s goal giving promotion-bound Rochdale a 1-0 win at relegation-threatened City. City just hold the league head to head lead with 23 wins to Rochdale’s 21, 19 matches finishing level.